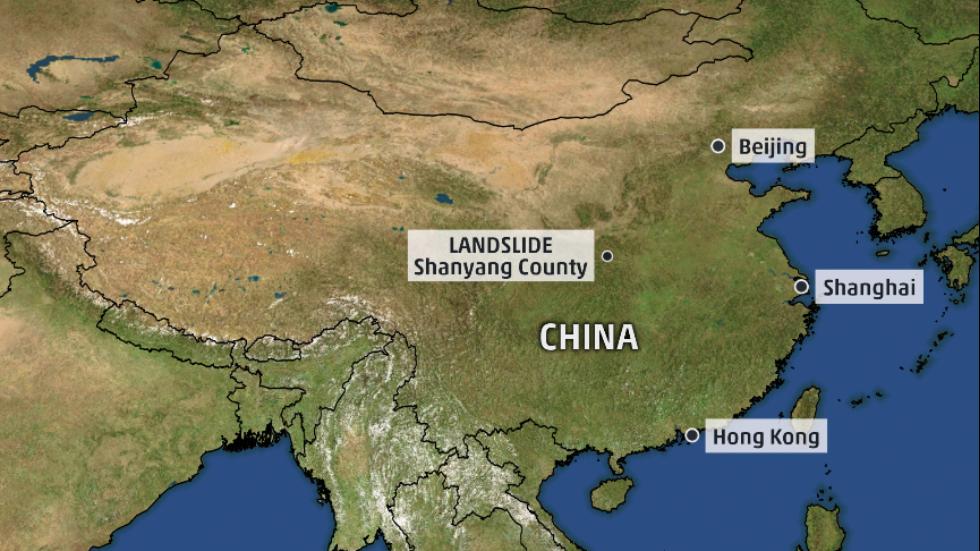 Dozens of people were missing after a landslide came crashing through a mining community in central China overnight, burying several dormitories and homes, local authorities told the Associated Press on Wednesday.

The provincial government of Shaanxi said 15 dormitories belonging to the Wuzhou Mining Co. were buried along with three homes in the mountainous county of Shanyang, and that 14 people had been rescued.

It said authorities have dispatched more than 700 rescuers to the site, where rocks continued to roll down mountain slopes.

The location of the landslide that occurred overnight in Shaanxi, China.

State broadcaster CCTV said the area was struck by recent heavy rains — though these rains weren’t caused by Typhoon Soudelor, which swept through Taiwan and southeastern China over the weekend.

“Based on satellite data, it appears that the remnants of former Typhoon Soudelor did not contribute to heavy rains in the area of the landslide,” said Chris Dolce, a meteorologist with weather.com. “This is because Soudelor’s remnants tracked well east of there.

“Instead, an upper trough in the middle portion of the atmosphere has been located over central China since the beginning of the week,” he added. “This likely provided the needed lift in the atmosphere to generate rainfall over the Shangyang County area.”

Rescuers were hampered by steep and rough terrain, and were filling in a stream to build a road to allow heavy machinery better access to the site, CCTV said.

The company mines vanadium, an element used in steel alloys.

Deforestation and soil erosion are major problems in Chinese mountainous areas, where mining, road construction and logging have stripped slopes of vegetation.