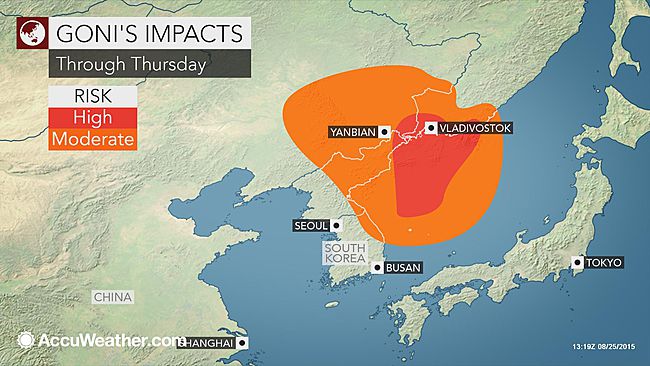 Goni battered western Japan and southeastern Korea with damaging winds and flooding rainfall on Tuesday and is now tracking northward through the Sea of Japan.

The next target for Goni will be northeastern China and southeastern Russia, including Yanbian, China, and Vladivostok, Russia.

Goni will continue to weaken prior to making its final landfall around Vladivostok, Russia, during the middle of the week.
Flooding rainfall and wind gusts of 65 to 95 kph (40 to 60 mph) will remain a threat around the borders of southeastern Russia, northeastern China and northern North Korea for several days before Goni dissipates across the interior of China.
Rainfall of 50-100 mm (2-4 inches) will be common across this region, with localized amounts exceeding 150 mm (6 inches) leading to a high risk for flash flooding.

While flooding is possible, the rainfall is also needed in Vladivostok as the summer months have been abnormally dry this year.
Rainfall since June 1 is less than 40 percent of normal, with only 121 mm (4.75 inches) falling in the city.
During Goni’s long trek across the west Pacific, it left death and destruction in its wake.

Goni left 21 people dead, mainly due to landslides, in the Philippines, the Associated Press reports.
As Goni moved northward and passed through Ishigakijima, Japan, it produced sustained winds of 162 kph (101 mph) and a gust to 255 kph (159 mph).
The city endured sustained winds over typhoon force for four straight hours. The winds were strong enough to damage buildings and flip over automobiles.

Goni remained a very powerful typhoon as it tracked just west of northern Ryukyu Islands Monday bringing total rainfall of 75-150 mm (3-6 inches) to areas from Okinawa to Amami Oshima.
Goni then plowed into western Kyushu with typhoon-force winds and rainfall totaling over 250 mm (10 inches) in some areas, including Mount Unzen.

While South Korea was spared the strongest winds of Goni, a soaking rain fell over much of the eastern half of the county with rainfall totaling 50-100 mm (2-4 inches) across the eastern coastal plain.
Localized amounts exceeded 150 mm (6 inches).