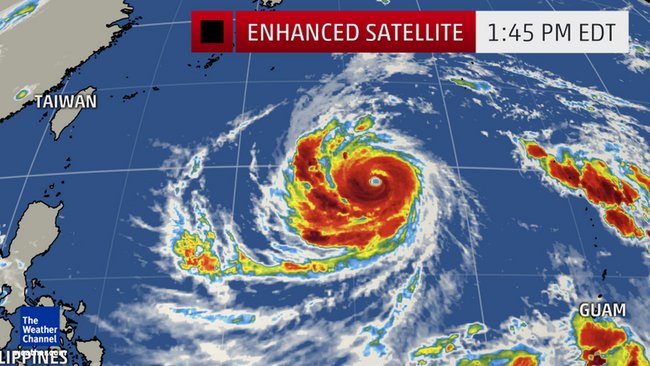 Soudelor intensified rapidly over the western Pacific Ocean after raking through Saipan, a U.S. commonwealth in the northern Mariana Islands.

Super Typhoon Soudelor became the fifth super typhoon of this year Monday after undergoing a replacement of its eyewall, a process which occurs in all intense tropical cyclones. A super typhoon is defined by sustained wind speeds of at least 240km/h.

According to Tuesday’s 11 a.m. EDT bulletin from the Joint Typhoon Warning Center (JTWC), Soudelor remained the equivalent of a Category 5 hurricane with maximum sustained winds of 260km/h (one-minute average) and gusts to 315km/h.

Monday afternoon, U.S. EDT, Soudelor was estimated by the JTWC to pack maximum sustained winds of 290km/h and gusts to 355km/h.

According to the Digital Typhoon database, Super Typhoon Maysak was the year’s previous strongest typhoon, bottoming out at an estimated 910 millibars. South Pacific Cyclone Pam in March reached peak estimated sustained winds of about 265km/h (145 knots) in the South Pacific basin.

Soudelor continues to track to the west-northwest over the open waters of the Western Pacific, steered by high-pressure aloft over Japan, which is also responsible for stifling, persistent heat over the Japanese mainland.

(MORE: What is the Saffir-Simpson Hurricane Wind Scale?)

Thanks to this upper-level high pressure system, instead of curling out to sea east of Japan, Soudelor will be guided toward Japan’s southwestern Ryukyu islands, Taiwan, then parts of southeast China late this week.

Even though it is expected to be weakening by then, Soudelor may still be a strong typhoon upon reaching those areas.

Here is the latest forecast timing of the closest approach of the center of Soudelor, according to the JTWC (all times local):

For now, the main island of Okinawa (including Kadena Air Base) lies at the north end of the forecast swath, but it remains far too soon to rule out a closer pass of the center of Soudelor to Okinawa. If the track trends closer to Okinawa, the nearest pass would occur Thursday night or Friday morning.

A direct hit of the eyewall on the Taiwanese capital, Taipei is possible.

In southeast China, the provinces of Fujian, Zhejiang and Guangdong are most at risk of a typhoon landfall this weekend.

Shanghai is at the northern edge of Soudelor’s center path. However, strong winds and locally flooding rain are possible, there, even if the center tracks well to the south.

Soudelor’s center will most likely track northeast of Hong Kong, so the primary impact, there, may be an outer band of heavy rainfall. Any track farther south over the next few days may bring the center ultimately a bit closer to Hong Kong.