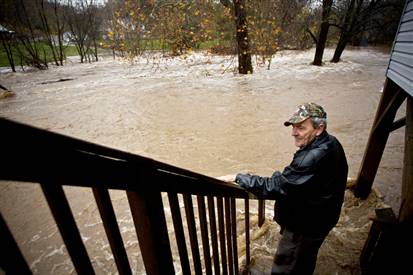 LANGLEY, Ark. – A preacher whose church has cared for survivors of the flash floods that ripped through an Arkansas campground and killed at least 18 people anguished over what he would tell them Sunday.

“You want people to escape for a moment and focus on God, but they’re going to return to the reality of what they’re here for,” Graig Cowart, pastor of the Pilgrim Rest Landmark Missionary Baptist Church, said ahead of his Sunday morning service.

His church has been a sanctuary for survivors and relatives of those who disappeared when a pre-dawn wall of water descended on sleeping campers at Albert Pike Recreation Area on Friday, leaving them frantically trying to scramble up steep terrain in the dark.

The search for victims was suspended late Saturday as darkness amid the rocky terrain made it too dangerous to continue. It resumed early Sunday morning, with Arkansas State Police spokesman Bill Sadler saying no more than three people were still unaccounted for.

Authorities had received reports of up to two dozen missing campers. But Sadler said Sunday that authorities don’t believe most of those people were in the campground during the flash flooding.

Cowart, whose church has helped shield survivors from 95-degree heat and reporters, said his service would be short and informal with a reading from the Book of Romans. He said its message about how everything comes together for God’s good may help in the coming days.

The last time someone was found alive was late Friday morning. Only two bodies were found Saturday as swollen rivers subsided and anguished relatives awaiting word of loved ones grew more and more frustrated, knowing that at some point the search mission would become one of recovery.

At least six of the 18 people confirmed killed were young children, according to a list released by Gov. Mike Beebe’s office publicly identifying 15 of them. Among them were five people, including three children, from Gloster, La., as well as three others from that state and six from Texas.

The only Arkansas victim identified was Leslie Jez, a 23-year-old mother and wife from Foreman whose husband, Adam Jez, was listed as among those who survived the flood.

“So ready to go camping this weekend,” she wrote on her Facebook page Monday. “Kaden is going to love it!!” She later added, “Not looking forward to that cold water, but sounds like I might change my mind after seeing how hot it’s supposed to be.”

About 200 searchers combed some 20 miles of wilderness along the receding rivers on Saturday. Crews on kayaks and canoes scanned the thick brush and debris in the swollen Caddo and Little Missouri rivers for bodies, but experts say many of those killed could be trapped under fallen trees and rocks, and that the river water likely won’t be clear enough to see through for several days.

Tom Collins, a Spring Hill volunteer firefighter, said the debris in the water was frustrating their attempts to recover bodies, and that there were so many fallen trees that it looked like a “beaver dam.”

Other searchers rode out on horseback and ATVs to scan the heavily wooded area and rocky crags along the rivers, where debris hung as high as 25 feet up in tree branches. Cell phone service and visibility from the air in the heavily wooded area are very poor, hampering search efforts. Portable cell towers were dispatched to the area in the hope that stranded survivors would be able to call for help.

Beebe said many of those missing are people whose relatives called saying they believed they were camping in the area, but weren’t sure. He said officials are running the license plate numbers of vehicles found in the area to try to contact their owners.

Authorities initially feared there were many more people unaccounted for. A register that would have showed who was staying at the campground was washed away in the flood, and a call center fielded inquiries about 73 people who hadn’t been accounted for as of Friday night.

Floodwaters rose as swiftly as 8 feet per hour, poring through the remote valley with such force that it peeled asphalt from roads and bark off trees. Cabins dotting the river banks were severely damaged, and mobile homes lay on their sides.

Forecasters had warned of the approaching danger in the area during the night, but campers could easily have missed those advisories because the area is isolated.

The last body found Friday night was retrieved 8 miles downstream from the campground, and authorities Saturday combed the headwaters of Lake Greeson, a large body of water about 20 miles from the camp that would be the furthest any of the bodies could travel.

The search was expected to take several more days, or even weeks, and family members of the victims were left not knowing if they’d have to return to their homes and jobs knowing that their loved ones’ bodies were still missing.

“This is not a one- or two-day thing,” said Gary Fox, a retired emergency medical technician who was helping identify the dead and compile lists of those who were unaccounted for. “This is going to be a week or two- or three-week recovery.”