Another near record high pressure system 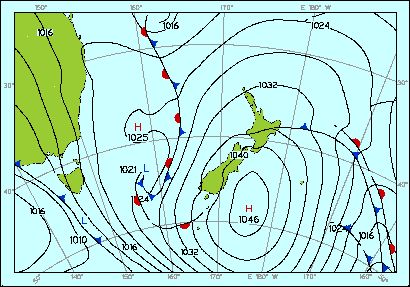 Another powerful high is again close to breaking the record  books in New Zealand – but looks likely to fall just shy of the highest ever recorded air pressure in this country due to its location.

The high, which is building south east of Dunedin will be stronger than the one recorded earlier this month on the 11th.

WeatherWatch.co.nz reports that the central air pressure is predicted to be around 1046Pa  (hectopascals) according to the government forecaster.

NIWA says the highest air pressure ever recorded in New Zealand was 1045.9 in Wellington set in 1889.

In 2008 a large high in the South Island and Chatham Islands reached 1044hPa – just shy of the national record.

However, like the October 11th high, this central air pressure will remain just offshore and away from weather recording equipment.  The east coast of the South Island will see the highest pressure – and it will certainly be a challenge for the current records.