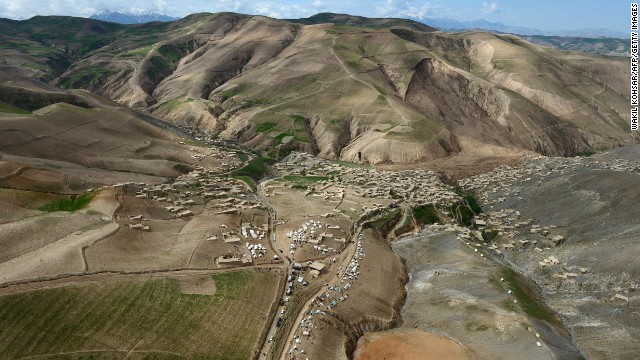 White tents line the sides of the valley where the landslide struck. Some villagers weep, others pray.

The remnants of their shattered community lies buried below, submerged under as much as 60 meters of mud.

In the space of one devastating week, natural disasters killed more people in Afghanistan than they did all last year.

At the heart of the destruction was the double landslide that engulfed a village in a remote northeastern province on Friday, killing more than 2,000 people.

A mass of rock and mud that came crashing down in the village of Abi Barak, in Badakhshan Province.

“The scale of this landslide is absolutely devastating, with an entire village practically wiped away,” said Richard Danziger, the chief of mission for the International Organization for Migration (IOM) in Afghanistan. “Hundreds of families have lost everything and are in immense need of assistance.”

Over the weekend, authorities gave up hope of finding anybody alive.

They suspended rescue operations, and declared the site a mass graveyard.

The first landslide on Friday swallowed at least 300 homes. When residents from a nearby village rushed to the scene to help dig people out, the second landslide struck, sweeping away many of the rescuers.

Exact figures are difficult to come by. But IOM staff on the ground said the double landslide killed as many as 2,700 people and affected 14,000 others.

One woman lost all seven members of her family, said IOM spokesman Matt Graydon, who visited the area Sunday.

The disaster wiped out acres of farmland and cut off local access to drinking water, making clean water one of the critical priorities for aid workers on the ground.

Relief agencies are struggling to get vital supplies to the area, but it’s a challenge.

Badakhshan is a remote, mountainous region of Afghanistan. The location, said Danzinger, makes it extremely challenging to transport heavy equipment and other supplies into the area.

A day of mourning

Sunday was declared a national day of mourning for victims of the disaster. TV and radio stations suspended the broadcast of entertainment programming out of respect to the victims.

In a statement, President Hamid Karzai expressed his deep sadness by the loss of life and property caused by landslide. He also promised that a high-ranking government delegation would travel to the affected area.

The landslide followed days of flash floods across nine northern Afghan provinces that killed more than 160 people, displaced 16,000 others and affected a further 50,000, according to a bulletin from the International Federation of the Red Cross.

“There have now been more Afghans killed through natural disasters in the past seven days than all of 2013,” said Mark Bowden, U.N. Humanitarian coordinator in Afghanistan.