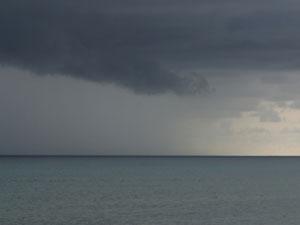 The New Zealand MetService have issued weather warnings this morning which cover parts of the country.
Rain and wind warnings have been issued with some lasting until the weekend.

A detailed warning outlook is provided below….

Severe gales for parts of the North Island also northwest Nelson and the Marlborough Sounds.

A burst of heavy rain for the northwest of the South Island and Canterbury headwaters.

A depression is expected to deepen rapidly in the eastern Tasman Sea later today, then cross the South Island during Friday. A period of severe gale northerlies is expected to affect the area from Raglan to Taranaki, also northwest Nelson, overnight Thursday to Friday. Severe gale northwesterlies are expected to develop about Wellington, Wairarapa and the Marlborough Sounds Friday morning, then spread to Manawatu, central Hawkes Bay and the Tararua District late Friday afternoon. These winds have the potential to cause damage to trees and powerlines, and make driving very hazardous.

Also a burst of heavy rain is expected to affect the west of the South Island from northwest Nelson down to the Glaciers, and the Canterbury headwaters north of the Rangitata River. Intensities in these areas could reach 20mm per hour, and cause rivers and streams to rise rapidly.

The ranges of northwest Nelson and Buller

In the 24 hours from midnight Thursday to midnight Friday, expect up to 100mm. The bulk of the rain should fall in a northwest flow, and occur from the Tasman mountains southwards, with maximum intensities of 15mm per hour or so Friday evening. However, in Golden Bay, there may be a burst of 30-40mm Thursday evening, with intensities briefly up to 15-20mm per hour.

The ranges of Westland north of the Glaciers

In the 21 hours from 3am to midnight Friday, expect 150-180mm of rain. Heaviest falls between 9am and 3pm, with intensities up to 20mm per hour.

The Canterbury headwaters north of the Rangitata River

In the 21 hours from 3am to midnight Friday, expect up to 130mm on the divide, with over 90mm within 5km east of the divide.

Western areas from Raglan to Taranaki, also Taumarunui, and also for northwest Nelson

Between 9pm Thursday and 3am Friday, northerly winds could reach 65km/hr, with gusts 130 km/h in squally thunderstorms.

Wellington Wairarapa and the Marlborough Sounds

Between 5am Friday and 6am Saturday, northwest winds are expected to reach 65 km/h at times, with gusts 130 km/h.

Manawatu, also the east of the North Island from Havelock North to Eketahuna

Between 6pm Friday and 6am Saturday, expect northwest winds to reach 65 km/h at times, with gusts 130 km/h.