A wet weather welcome for 2012 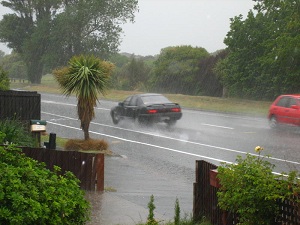 Tens of thousands across the North Island braved miserable weather and counted down to 2012.
Muck from the big wet was so bad a hose had to be hauled into Thames Hospital emergency department to clean patients turning up from the Coromandel Gold music festival before treatment because they were so caked in mud.
Clinical director Ruth Large said they were expecting overnight to be the busiest 24-hour period of the year.
“A lot of people were so badly covered in mud it was difficult to immediately find out what was wrong with them,” Large said.
“The mud was also being dragged through the building making the area quite dangerous, so we decided to get a fire hose and set it up in the ambulance bay to deal with the dirtier fans.”
Large added: “During the first day of the festival we treated about 68 people which is about double the numbers of last year and this time a lot of injuries were caused by slipping.
“We saw two people with broken ankles that needed surgery and there was also broken arms, shoulders and someone with a broken pelvis, as well as quite a few bumps and scrapes.”
At the Whitianga festival site, 12,500 people sloshed on in mud and rain at Ohuka Farm Lodge.
Festival co-organiser Mark Wright said 150 tonnes of metal were needed to create makeshift roads to help cars in and out of the venue.
There were also tractors helping pull cars out of mud, men on quad bikes helping 5500 campers and 48 buses bringing people in and out of the town.
“It’s wet and muddy just trying to help people out and make it a better experience.”
Aucklander Jessica Noyce had planned to stay at the campsite with her two cousins but opted instead for Coromandel.
“By the end of the night it was like a massive mudpool.”
Almost 28,000 people were expected to descend on Gisborne’s Waiohika Estate to see in the New Year at Rhythm and Vines. Among them, Martin Henderson and Taine Randell partied in the VIP section.
Spokeswoman Rebecca Lawson said last night it was raining during the headline act but 29,000 had stayed to party.
She said the wet weather was unlikely to deter fans, including 5000 onsite campers.
“They’re there to see these acts that are a pretty big deal to them. [The weather] certainly hasn’t affected anyone’s attitude.”
Up north, around 6000 partygoers were expected at the Highlife music festival, at Matakana Country Park.
Adam Bennett said the venue was rain-friendly as the area was mostly concrete or gravel. He said the night had been treated to clear skies with just a small amount of drizzle.
“It is going so well.”
Nearly 10,000 people were expected to attend the La De Da festival, at Daisybank Farm in Martinborough. Spokesman Mark Kneebone said a bar tent was closed early to accommodate wet fans and allow them to dry off under heaters.
“We’ve got 8500 people here having a good time and we are very happy.”
He said they had prepared for bad weather with more shelter and heaters, and were selling gumboots “by the hundreds”.
“We’ve also got 25 tonnes of stone chip to chuck down on the grass to help cars in and
out.”
However, not all events were immune to the wet weather, as several were moved or cancelled.
People celebrating the New Year at Mount Maunganui were disappointed when the beachside event was cancelled, replaced by fireworks on the Tauranga side of the bridge. A Tauranga City Council spokesman said the high winds and heavy rain meant stages on the main beach could not be safely erected.
Auckland resident Mark Snedden, 52, travelled with his wife, son and three friends to spend New Years at the Mount.
“It’s soaked, it’s soggy, it’s just miserable.”
He said that while the cancellation did not affect his New Year’s Eve plans, his son and his friends were planning on attending the event.
“They’ll be at a party indoors somewhere now.”
In Wellington, evening celebrations at Frank Kitts Park and a midnight fireworks display were called off because of the weather.
City events manager Lauren Fantham said the cancellation was a huge blow.
“We hate having to cancel events but especially for something like New Year’s Eve.”
The celebrations were to include two stages of entertainment featuring local musicians, African drummers, firedancers and comedians.
“We’d rather have people safe inside somewhere than catching colds from a cold wet southerly.”
In Rotorua, the Rock the Lake concert was moved indoors to the Rotorua Energy Events Centre.
Concert co-ordinator Monty Morrison said it was the first time since 1998 the event had not been held at the Soundshell and Village Green. Events manager for Rotorua District Council Martin Croft said two-thirds of the centre would be used, with a screen at the BayTrust Forum opposite the venue projecting the event.
Croft said he expected around 3500 people.
Morrison said it was an awesome night despite the setbacks. ”We are rocking, the massive fireworks finale is happening at midnight as planned.” The night was headlined by the cast of TV1 show Nothing Trivial.
Story by NZHerald.co.nz
Photo by David Stone