Home > News > A very warm winter continues for the mid... 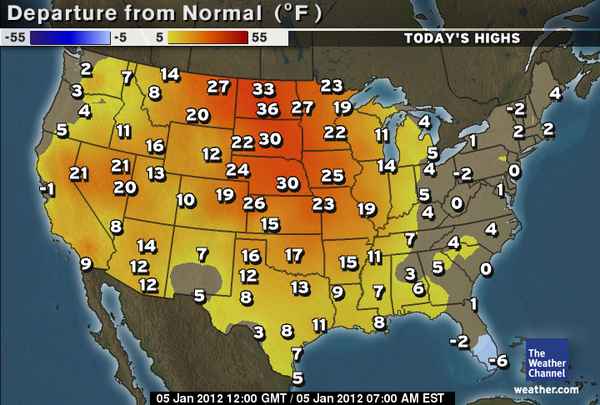 It’s winter on the other side of the equator.  You don’t need me to tell you that.

But maybe someone should send Ma Nature a reminder.

Normally, this is the time of year when brutally cold weather spreads across the American Midwest and and Great Plains.  States like Minnesota, Wisconsin, Iowa, North Dakota and South Dakota can experience temperatures that most Kiwis have only dreamt of.

But, that’s what happens when are living that far away from the equator in the middle of huge mass of land.  The average high for an early January afternoon is around -3 C (26 F) in places like Des Moines, Iowa and Minneapolis, Minnesota and La Crosse, Wisconsin.  Their winter right now is more like a New Zealand winter.

Keep in mind, this time of year, it is nothing for these locations to see temperatures below -17 C for several days in a row.

And this is just a continuation of what has already been a very mild winter.  December was very mild and almost snow-free.  Which actually helps contribute to the warmth.  A deep snow pack is a huge help in achieving very cold temperatures.

And for places in the US that are supposed to be warm, like Miami, Florida, temperatures are unseasonably cold.

Which actually makes sense.  The same mechanism that allows the warm air to surge north in one part of the country allows the cold air to spill south.

This winter still may average out for them.  Cory Malles, Chief Meteorologist for a television station in Wisconsin, says; “There’s still a lot of winter left.”  He says that this winter is starting off like the 2006-2007 winter did.  December and January were mild.  But when February started, back to back snow stoms  dumped almost 53 cm of snow on the region.

Malles says, “All it takes is a couple of snow storms and you are right back into good old fashioned winter.”

Now, colder air on the way for next week.  Daytime highs are expected to drop back close to 0 C.  However, no snow is in the forecast for at least another 7 to 10 days.