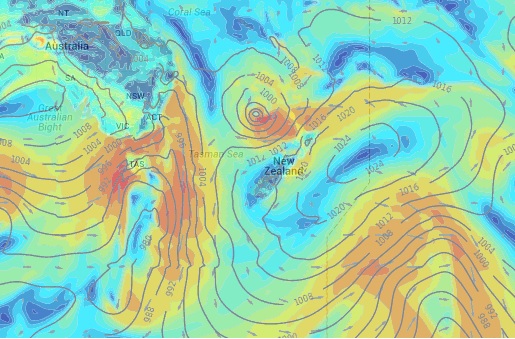 We’re focusing on the incoming front today – which is currently bearing down on the upper North Island this morning, with an associated trough to follow.
Our forecast team here is monitoring the patterns very carefully and at this stage it’s looking fairly unstable with the risk of isolated thunderstorms.

That system will bring strong north to northeasterly winds, particularly for northern New Zealand, and heavy rain as a result too – with possible storms and a strong downdraft in the wake of the front.

These winds may gust to gale force at times in exposed eastern areas up north, while the rest of the North Island is also in for some strong gusts.

In Auckland strong easterlies will start to ease later this morning.

Winds will be fairly gusty from the northeast for areas south of the Waikato (and eastern Waikato), though they will start to ease in the afternoon, and into the evening.

These are the conditions typically associated with thunderstorms, but the wind speeds may be high enough to form a tornado somewhere in the upper North Island, or all the way down to Waikato – but we will stay on top of the situation, and bring you the latest through the day if things change.

The Bay of Plenty and Waikato look like they’re in for some heavy rain from late morning too, with isolated thunderstorms possible.

Later today humidity and temperatures may increase in the north – especially if the sun appears. This could create isolated heat showers, these can sometimes contain severe thunderstorms and even small tornadoes.