Home > News > A rough start then plain sailing this we...

A rough start then plain sailing this week 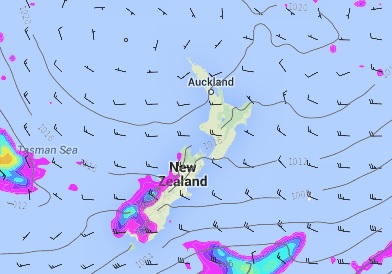 This week starts of a bit rough as mentioned in the title above, strong cold southwesterlies lie over the country today with wet weather for many. Tomorrow conditions ease considerably and the weather over the country stays that way for most of the week.

Generally speaking Tuesday through to Friday sees
mainly dry and sunny skies in the east, cloud at times in the west. Westerly quarter winds.

On Tuesday expect mostly sunny weather along the east cost of the South Island, winds tend southwest in the afternoon and this may bring some cloud. Cloud builds on the West Coast from morning, the odd light shower from late afternoon or evening. Cloudy periods about Southland with the odd shower, strong westerlies.

Sunny or becoming sunny in the morning along the North Islandâ€™s east coast, sunny spells in the west with southwesterlies freshening and cloud building a little from afternoon.

Sunny along the east coasts of both islands on Wednesday with light winds. Cloudy periods in the west breaks in the afternoon, westerlies.

Northwesterlies freshen over the South Island on Thursday, some high cloud develops in the east. Along the West Coast expect increasing cloud, a few showers about South Westland from morning then some late evening rain. The odd light spit possible about North Westland, mainly from evening.

West to northwest winds for the North Island. Sunny out east, cloud at times in the west.

Friday starts to change as a front and low system moves onto the South Island, fairly cloudy skies with rain on the West Coast and showers moving into the east later in the day. Westerlies lie over the North Island, sunny in the east, cloud builds out west.