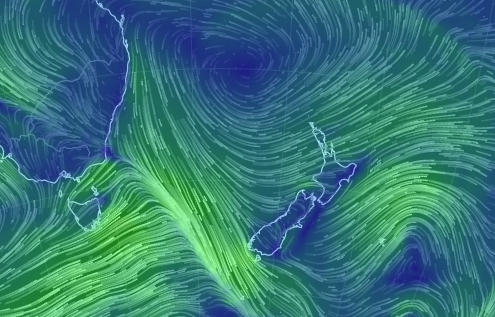 One of the members of the WeatherWatch.co.nz team (and I won’t say who to protect his identity) described the situation currently over the country as ‘a dog’s breakfast’.
Our best advice for specific regional outlooks is to check out our latest weather video, but to give something of an idea of the situation, we will do our best here!

There currently sits a strong west to northwest airflow over the country, which will tend to southwest during the day tomorrow, as a strong, cold and disruptive front moves over the upper south and onto the North Island.

Winds ahead of the front will blow strongly from the west and northwest all the way from Taranaki through to Wellington, and into Cook Strait.
Strong gales are also looking likely for the Wairarapa and possibly through to Southern Hawkes Bay, before the front moves through. Winds north of Taranaki will blow gustily, though not as strongly as places to the south.

Winds will gust strongly in Southland and coastal Otago, too, for a time, coming from the west and southwest, with the strongest of these in exposed places on the coast through the day.

For the West Coast, it’s looking like heavy rain to start the day, but then conditions should ease during the morning, as the southerly front moves northwards and away.

Marlborough is in for strong northwesterly winds (a risk of gale force strength) first thing in the morning, but conditions will ease here too as the system heads north in the mid to late morning.

Stay up to date with our latest weather maps, showing exactly where and when conditions will worsen for you, right here on WeatherWatch.co.nz.