A bit windy & showery for the NI on Sunday 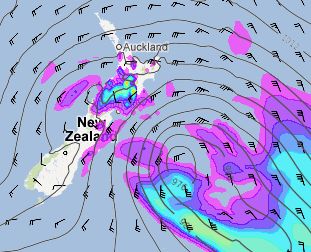 We can say goodbye to the low on Sunday, but not its influence.

As the low treks off to the east, it will leave some rather breezy conditions in its wake.  Winds won’t be as strong as what we saw today.  But breezy to brisk sou’westerlies can be expected about the eastern South Island and breezy westerlies will be found about most of the North Island during the first half of tomorrow.

In addition, a weak trough of low pressure will be stretched out across central New Zealand tomorrow morning.  That will set the stage for some lingering showers about the upper South Island and lower North Island in the morning.  That means people in Wellington and New Plymouth can expect to see a wet start to Sunday.  The showers could extend as far north as Gisborne and Hamilton.

As we approach the noon hour tomorrow, that trough and the precipitation associated with it will slide north.  That means the central North Island could see some showers, including Hamilton and Tauranga.

The weather will also be unsettled enough to keep chances for showers going throughout the day about the upper tip of the North Island, including Auckland.

A few shower chances can’t be ruled for the early part of tomorrow for Christchurch either.  But drier weather and clearing skies will be the trend as Sunday wears on.