A bit cloudy, a few showers during the week 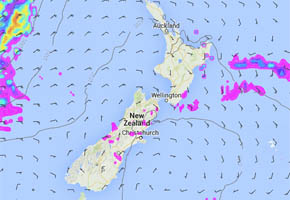 This week is looking fairly average, no really sunny weather but nothing extreme either be it heavy rain, snow or cold conditions. Perhaps we might see some fog in a few areas morning and night though.

On Monday a ridge sits over most of New Zealand with a front over the lower half of the South Island. Expect sunny areas and periods of cloud for much of the North Island, winds for the east or northeast. There could be a shower or two about also, especially about the Bay Of Plenty during the day and for other regions this afternoon. A chance of fog morning and night inland. For the South Island conditions expect some rain for the West Coast south of Greymouth and showers elsewhere in the east. Dry for the upper half of the Island with southerlies spreading northwards during the day along the east coast bringing increasing cloud.

On Tuesday the South Island is looking fairly cloudy, winds will be light. A few showers about also especially Canterbury in the east and parts of the West Coast. The North Island has sunny areas and some cloud for much of the day, easterly quarter winds generally speaking although the will be light. There may be a light shower or two crop up for some in the afternoon otherwise a mainly dry day ahead. Fog possible for inland parts of the North Island morning and night once again.

Plenty of high cloud over the country on Wednesday in a northeasterly airflow, meanwhile a high sits out to the east of New Zealand. A fairly cloudy day for the South Island with a few patchy light showers about mainly for the upper half. The North Island sees periods of cloud and a few sunny areas with light winds, the odd light shower about also mainly in the afternoon for some Waikato southwards.

A high continues to sit out to the east of the country on Thursday directing a northeasterly airflow over both islands. This time the North Island is starting to cloud up a little with the odd light shower possible Auckland southwards during the day, in the South Island we see some sun finally break through, winds will be light.

The northeast airflow over the country picks up a little on Friday, sunny areas and some cloud for most regions. The odd shower may affect Gisborne northwards in the east and perhaps a few coastal areas exposed to the northeast like the Bay Of Plenty, Coromandel and eastern Northland.