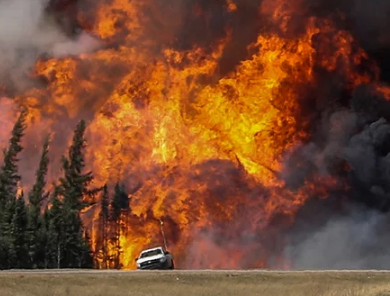 May was the 13th month in a row to break temperature records according to figures published this week that are the latest in 2016’s string of incredible climate records which scientists have described as a bombshell and an emergency.

The series of smashed global records, particularly the extraordinary heat in February and March, has provoked a stunned reaction from climate scientists, who are warning that climate change has reached unprecedented levels and is no longer only a threat for the future.

Alongside the soaring temperatures, other records have tumbled around the world, from vanishing Arctic sea ice to a searing drought in India and the vast bleaching of the Great Barrier Reef. The UK has experienced record flooding that has devastated communities across the country and scientists predict that the flash floods seen by parts of the country in recent days will increase in future.

“The impacts of human-caused climate change are no longer subtle â€“ they are playing out, in real time, before us,” says Prof Michael Mann, at Penn State University in the US. “They serve as a constant reminder now of how critical it is that we engage in the actions necessary to avert ever-more dangerous and potentially irreversible warming of the planet.”

It was just last December when the world’s nations sealed a deal in Paris to defeat global warming but Prof Stefan Rahmstorf, at the Potsdam Institute for Climate Impact Research in Germany, says: “These [records] are very worrying signs and I think it shows we are on a crash course with the Paris targets unless we change course very, very fast. I hope people realise that global warming is not something down the road, but it is here now and it affecting us now.”

“What is happening right now is we are catapulting ourselves out of the Holocene, which is the geological epoch that human civilisation has been able to develop in, because of the relatively stable climate,” says Rahmstorf. “It allowed us to invent agriculture, rather than living as nomads. It allowed a big population growth, it allowed the foundation of cities, all of which required a stable climate.”

But the spikes in global surface temperatures in recent months have been anything but stable. They did not just break the records, they obliterated them. “The numbers are completely unprecedented,” says Adam Scaife, at the Met Office in the UK. “They really stick out like a sore thumb.”

The scorching temperatures mean 2016 is all but certain to be the hottest year ever recorded, beating the previous hottest year in 2015, which itself beat 2014. This run of three record years is also unprecedented and, without climate change, would be a one in a million chance. Scaife says: “Including this year so far, 16 of the 17 warmest years on record have been since 2000 â€“ it’s a shocking statistic.”

Thermometer records go back to 1880, but ice cores, tree rings and corals show global warming driven by humanity’s burning of fossil fuels and forests has left the planet at its hottest for at least 5,000 years. “If we are not above this [temperature] already, we will be in 10 or 20 years’ time and then you have to go back 120,000 years to find higher temperatures than present,” says Rahmstorf.

Another shattered record is the amount of carbon dioxide in the atmosphere, which is on course to rise by a record amount this year, leaving the symbolic landmark of 400 parts per million to history. “We know from Antarctic ice cores that go back almost a million years that CO2 was never even remotely as high as this,” says Rahmstorf, and the rate at which humanity is emitting CO2 is the fastest for 66m years.

Fast-rising CO2 levels are almost entirely the reason for the record-busting year. But the natural climate phenomenon called El NiÃ±o has played a part. Cyclical changes in ocean temperatures over decades lead to El NiÃ±os during which stored heat is released from the oceans, impacting temperatures and weather around the globe.

Scientists agree about a fifth of the temperature rise seen in recent months is due to El NiÃ±o. However Scaife says: “I suspect some of the months would have still been records, even without the El NiÃ±o”. He points out that 1998 saw an ever bigger El NiÃ±o, resulting in a record hot year, but that this has now been far surpassed: “It is not even in the running anymore, falling way down the list.”

El NiÃ±o is now waning into to its opposite phase, called La NiÃ±a. But that does not allay the scientists’ climate concerns: “The La NiÃ±a will not be as cool as the El NiÃ±o was warm. We are very, very sure of that,” says Scaife. “It probably means that 2017 will not be a record year, but compared to other La NiÃ±a years, it is likely to be much warmer than normal.”

Furthermore, there may be more to the record-breaking series than meets the eye. “There is something more going on than the usual global warming trend and El NiÃ±o, because in the past El NiÃ±o has led to single years breaking records, but it has not caused several years in a row to break records,” says Rahmstorf.

“There is some unexplained part to this and it is concerning, because we don’t understand it and it is hotter than expected,” he says. “I hope the data coming in the next six months or so will bring us some important clues.”

The heat so far has already had major impacts, including a record temperature of 51C in India amid a serious drought and a record warm autumn in Australia, as well as many in the US. “It is in my view highly unlikely that we would be seeing record drought, like we’re seeing in California, record flooding in Texas, unprecedented wildfires in western North America, and the strongest recorded hurricanes in both the northern and southern hemisphere were it not for the impact of human-caused global warming,” says Mann.

It’s no longer a question whether 2016 will be hottest on record, but by how muchhttps://t.co/F69VfzC4d4 #climate pic.twitter.com/RyCAJ8W26X

Killer heatwaves are increasing too, which is the clearest impact of global warming, says Rahmstorf: “Our analysis of monthly heat records around the globe shows they now occur five times as often. It is those monthly heat records that are representative of heatwaves that last for weeks on end and they are ones that take the highest death toll.”

The UK has been affected too, with December breaking temperature and rainfall records.

“The government, which got caught out by two record wet winters in the last three, has suddenly woken up to the fact, which is why they have set up the National Flood Resilience Review. It is now something we are all going to have to come to terms with in the UK.”

Ward says seeing the records broken may mean more people make the connection between action on to cut emissions, such as support for green energy, and the impacts of global warming. He says the global climate deal agreed in December shows every government already knows this is a problem that needs urgent action, but that the high temperatures already occurring will increase the emphasis on adapting to extreme weather events in addition to cutting carbon emissions.

“The impacts we’re beginning to see are just the start and we know we are going to be facing a worsening situation for at least the next couple of decades even if we do cut emissions,” Ward says.

“What’s worrying [about the record-breaking 2016] is that we are in unprecedented territory and we don’t really know what the consequences will be,” he says. “There are likely to be plenty of surprises, some of which will be nasty.”

Science has lost the plot in a big way over Climate Change. It’s way more advanced than they think and many are saying and accepting that too. Feel sorry for the dinosaurs.

“the rate at which humanity is emitting CO2 is the fastest for 66m years”. I thought the heat was from Raquel Welch..wait, no that was “One million Years BC.”

PS. thank you Weatherwatch for the cool editing palette.

Note: In the 2014 photo, there is a shoulder (Robert’s Pt.?) on the left ridge directly in front of the visible remnant of the glacier. The shoulder is about 1,200 feet above the valley floor.

The same shoulder is visible in the 1928 photograph, but it’s even with the surface of the glacier. 1,200 feet of ice thickness – gone in 86 years.