27 dead as Nasvhille disappears under water 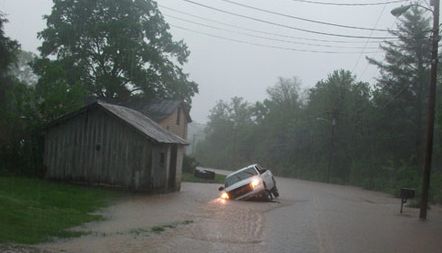 Much of downtown Nashville remained under a blanket of murky water Monday after a massive system of rain and thunderstorms pounded much of Tennessee over the weekend.

The severe weather was blamed for at least 27 deaths — 18 in Tennessee — across the Southeast between Saturday and Monday, emergency officials said. Ten of those deaths occurred in Davidson County including Nashville, the Nashville mayor’s office said.

Nashville residents said that despite forecasts of rain going into the weekend, they had little time to prepare for the floodwaters that crept into homes, washed away roads, prompted evacuations of hotels and displaced thousands of people.

“We all knew that there was going to be heavy rains this weekend, but Nashville normally gets about 5 inches of rain in the month of May and nobody could have predicted 15-16 inches of rain in 48 hours,” resident John Rives said.

CNN iReporter Tom Frundle said the flooding is as bad as he’s ever seen.

“I’ve lived in different parts of the country, and I’ve never seen anything like this,” he said, a sentiment echoed by many Tennesseans, including Gov. Phil Bredesen.

“It’s an astonishing sight for someone who has lived here a long time,” the governor said.

CNN.COM has extensive coverage of this flooding including photo galleries and a number of videos.  Go to www.cnn.com for the latest.