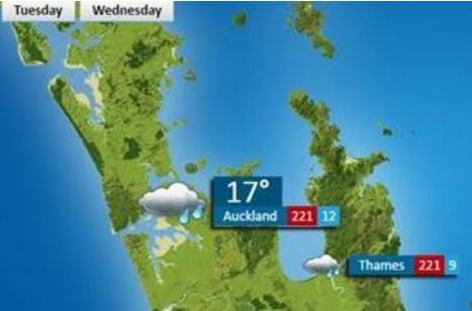 MetService were advising wearing a hat and sunglasses for sun protection but as temperatures were tipped to soar past boiling point some wondered if that was really going to be enough to counter heat never before seen on Earth.

In temperatures that paralleled the heat experienced on the planet closest to the sun, a glitch on the government forecaster’s website and app meant many parts of the country were set to melt in unsurvivable heat.

Both temperatures would have easily trounced the highest recorded temperature ever recorded on earth – 56.7 C – measured more than 100 years ago in Death Valley, California.

The two recommended clothing layers are a spacesuit and a singlet.https://t.co/WX1856U6P9

The average daytime temperature on Mercury is 167 degrees Celsius.

But rather than being a day of frying it was a merely a technical glitch.

“We have been having some problems with the website/app displaying temps with an extra first digit. Apologies, it should be fixed now,” tweeted the forecaster earlier today.

“People would have had quite a shock seeing that earlier this morning,” said MetService spokeswoman Lisa Murray.

We have been having some problems with the website/app displaying temps with an extra first digit. Apologies, it should be fixed now. ^CD

Rather than being hotter than hell, Auckland and northern regions could expect a more autumnal day with heavy showers while the rest of the country could expect showers.