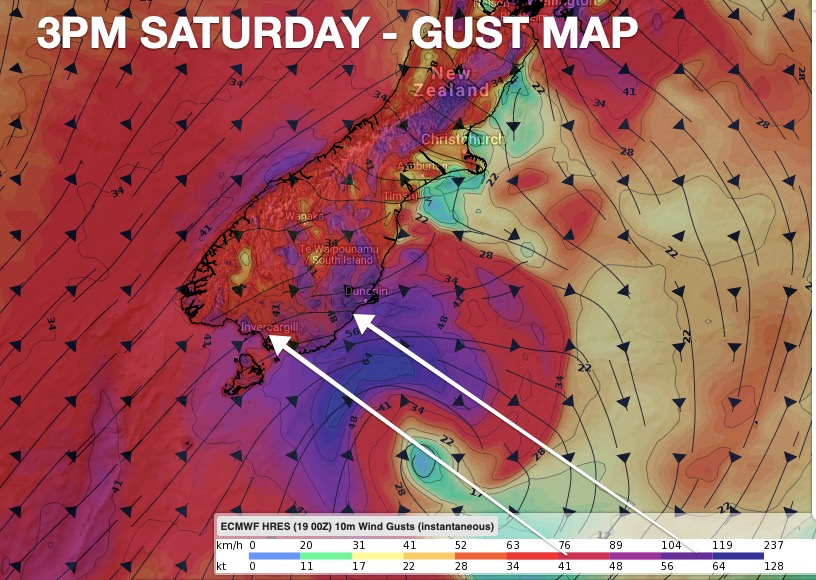 Updated 10:51am to capture new MetService warnings — Saturday has stormy weather in the very south of the South Island with damaging winds possible in some exposed places as a low tracks by.

Saturday will start with gales around parts of Southland then those winds shift around to Dunedin/Coastal Otago across the day. Winds may surge over gale force with gusts over 100km/h in exposed areas on land (and even higher winds just out at sea near the centre of the low).

In our earlier update this morning Government run MetService hadn’t issued a wind watch or warning – they have now updated and you can find warnings and watches here: www.weatherwatch.co.nz/maps-radars/warnings/metservice

The windy areas are broken into two pieces. 1) The usual gusty nor’westers over the Southern Alps. 2) The gales wrapped around part of the centre of this low. It’s this second part that is most potent – but it’s also covering a fairly small area, so a slight shift in the centre of the low may reduce (or increase) the winds forecast in this update (issued 8am Friday).

By night time the winds start to ease back slowly.

Rain will also be heavy on the West Coast but due to the low shifting from the south coast to the east coast it will move rain levels around. Fiordland has around 60mm and around 25mm for more populated parts of Southland, Otago and the West Coast. Elsewhere rainfall is very little.