10,000 without power after Easter storm 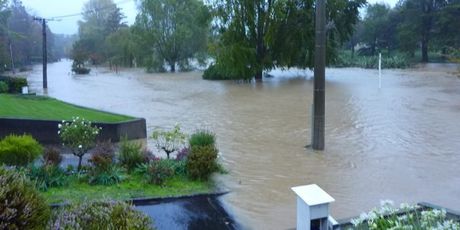 New Zealand’s start to the long weekend has been miserable in many areas, with residents in the South and North Islands battling stormy conditions on the first day of the Easter holiday period.

Weather from ex-tropical cyclone Ita bore down across the country yesterday and overnight, bringing widespread power outages, flooding and slips in many areas.

Those along the West Coast – one of the worst hit areas – have been working all morning to clear flooded areas and debris, with more bad weather expected tomorrow.

Gale force winds even forced a group of Cobden residents to seek shelter at an emergency refuge centre at the Greymouth Baptist Church overnight.

Red Cross volunteers from Christchurch and the West Coast provided food, water and shelter for the 20-strong group, left stranded after the Cobden Bridge was closed due to high winds.

Doug Winter, a volunteer who came from Christchurch to help, described the wind as “horrendous”.

“We kept them fed and watered, nice and warm until they could go back to their houses.

The bridge was closed about midday yesterday, with winds gusting up to 140km/h.

It was a case of the community coming together and helping each other in a serious weather event, Mr Winter said.

“They [Cobden residents] were very grateful. They were on their way between 7 and 8:30 this morning when the winds had died down and the roads were clear enough.”

Most of our damage is from Greymouth up to Granity, north of Westport, he said

“We are assisting people to check their roofs and to make everything watertight – damaged roofs and things like that from the wind – because there’s more heavy rain expected there tomorrow.”

Sixty five millimetres of rain fell across the city overnight, and 180 millimetres in Akaroa. All river levels were running high this morning, the Christchurch City Council said.

While the Heathcote River has flooded, the Avon River and Styx River had not.

Mr Norris said firefighters had been responding to “normal weather-related jobs”, such as flooding and felled trees.

In the North Island, those around the Bay of Plenty were facing rolling thunderstorms and heavy rain.

A severe thunderstorm watch was in place for the Coromandel Peninsula, Waikato, Bay of Plenty, Rotorua and Taupo.

* SH 53 Featherston to Martinborough: road closed due to flooding at the Waihenga River bridge

* SH 36 Mangorewa Gorge: road closed due to slip blocking traffic in both directions

* SH 6 Ross to Haast: Road Closed due to strong winds and fallen trees

Karen on the TVNZ weather last night declared that the ‘worst was over’ (as the storm moves south).  Silly one-eyed Auckland media comment.  Most of the country exists south of Auckland Karen.