Home > News > ZELIA LATEST: Norfolk Is to be hit tonig...

ZELIA LATEST: Norfolk Is to be hit tonight; Still Cat 3 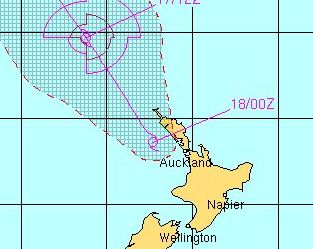 Severe Tropical Cyclone Zelia remains at a Category 3 status late this afternoon however the storm is predicted to weaken fairly quickly overnight tonight according to various forecasters.

WeatherWatch.co.nz says the severe cyclone is about 1000kms north west of Cape Reinga as of 5pm. 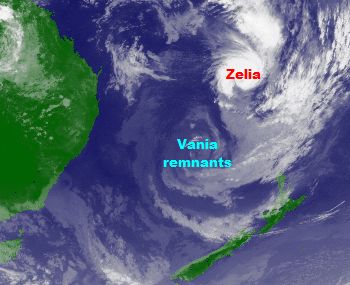 Zelia has slowly started to weaken as she approaches cooler sea temperatures.  She remains a weak Category 3 cyclone and WeatherWatch.co.nz predicts Zelia will likely drop to a strong Category 2 cyclone this evening or overnight and fall to a Category 1 cyclone within the next 12 to 24 hours.

These winds are destructive and can lift roofs from houses, uproot trees and break boats from moorings.

BoM says conditions may even be worse than that for the small Australian territory.  “There is the possibility of a brief period of very destructive hurricane force winds (sustained winds of 120km/h) gusting 185km/h”.

Gales should ease around 8 to 9am local time says BoM.

That’s because Zelia will then be fast approaching New Zealand.  Winds in the upper North Island, closest to Zelia’s centre, should start to pick up quickly in the afternoon.

“Cyclones are quite different to the usual storms we get in New Zealand” says WeatherWatch.co.nz Head Weather Analyst Philip Duncan.  “Most lows that hit us create strong winds – mainly between the low and nearby high pressure system.  With a tropical cyclone it’s not about the highs, it’s simply about a deep hole of air pressure creating severe winds around the centre”.

He says an analogy is to think of a bath full of calm water (the air pressure) then pull the plug.  The plug hole is the centre of the cyclone with the water (air) rushing around it.  “It will be incredibly strong near the centre but fairly calm not too far away from it”.

Mr Duncan says Zelia’s hurricane force winds only extend a short distance from the centre, less than 40kms from the middle of the storm.   “Because of this the weather can be quite calm leading up to a tropical storm then go down hill very fast”.

The cyclone is travelling very fast too – with it expected to speed up even further tonight.   The Joint Typhoon Warning Centre says Zelia is racing along at almost 60km/h.  Many tropical storms only travel a little over walking speed however Zelia is caught up in a fast moving highway of high altitude air.

This fast momentum will help build winds in the south eastern quarter towards New Zealand, in the same way pushing a hand through water pushes the water up ahead of it.

While Zelia will no longer be a “tropical” cyclone by the time she reaches New Zealand she will still maintain category 1 strength winds when she first arrives tomorrow afternoon.

WeatherWatch.co.nz says this is the first ex-tropical storm to maintain cyclone strength winds since Cyclone Drena in 1997.

The Joint Typhoon Warning Centre says Zelia lost her eye several hours ago as the system continues to slowly weaken.

I was born in Tauranga in 1960. I have always been interested in the weather and predicting it.
Firstly I must say I find it very strange that I type the word Tauranga and your website puts a dotted line under it telling me I have spelled it wrong. this is New Zealand, cant you get it right.
Secondly, please stop over exaggerating the conditions, leave that to our so called MET SERVICE, which I very much believe is done over seas now. All this storm hype is doing is scaring people and holiday makers unnecessarily. Vania is now almost totally gone and Zelia will also very much dissipate. I get my information from the US Government navy in the form of wxmaps. I make my own forecasts.

It’ll be your browser which is not understanding the place name, ‘Tauranga’, as it won’t be in its dictionary.

Right-click the word, and choose ‘Add To Dictionary’.

It has nothing to do with the Weather Watch site.

I hope that helps. Also, in my humble opinion, I think Phil and the others that run this site make very sure they aren’t exaggerating the coming weather.

I hope you enjoy forecasting your own weather – perhaps you could start your own website.

Pull out all the chocks Phillip
go to town on the warnings mate me thinks
(just my humble opinion)
this is shaping up to cause damaging winds for the upper NI
as it is still moving SE straight at us, still,
and you can add the forward windspeed to the Northerly or NW winds on its eastern side

Come on Mike, Get over yourself! I fine that Weather Watch is a VERY GOOD website, lots of info, I am from Tauranga, and have in the last month moved to Te Puke. As for the Weather Watch warnings, KEEP IT UP because I would like to know “what” clould happen, and I bet that if the worse did happen and your US map got it wrong you would be most upset with NZ sites that did not say anything!

Keep up the good work WW, and thanks to the team for all your time you put in to this site.