Your weather this week & coming weekend 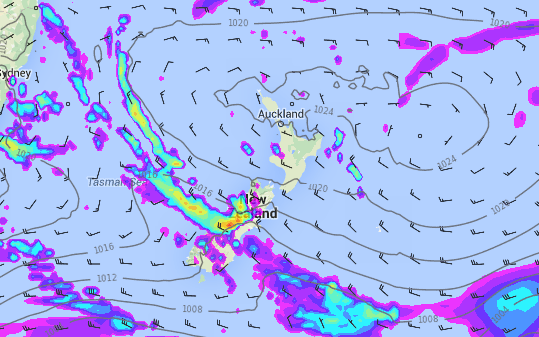 This week is another changeable week – but the weather isn’t quite so dramatic as it has been for some places recently as a fairly typical set of Autumn weather moves in.

Over the next two or three days expect fronts to move up the country bringing downpours – especially regions that are exposed to the Tasman Sea in the west and north.

Overnight Tuesday a South West air flow will spread across most, if not all, of New Zealand.  This will mean temperatures may drop a degree or two – but eastern and north eastern areas will be quite sunny and dry.  There will be a few heavy downpours in the Upper North Island as this front moves through later on Tuesday PM.

Towards the end of the week a very large high in the Tasman Sea will start to spread into the nation – bringing light winds, cool nights and mild days to most parts of the country.

The coming weekend is looking dry and mild for most places thanks to high pressure – hard to work exactly which regions will be sunniest but safe to say that inland should be quite sunny – and out to the east after morning cloud.

But a cold front out of the South Ocean will likely see a burst of rain on the West Coast on Saturday night or across Sunday.

In fact – if the sub-tropical air flow connects to this rain band we may see more rain warnings for the West Coast on Sunday as the heavy but narrow band of rain slows down against the Southern Alps.  We’ll keep you posted.