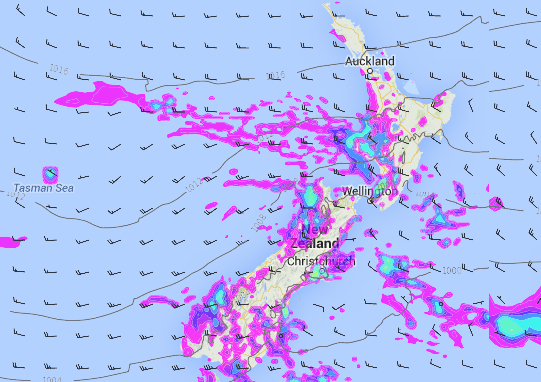 The northwesterly airflow that’s been dominating the country’s weather will stick around tomorrow, and strengthen across much of both islands.

Starting up top, the upper North Island can expect a mix of sunny and cloudy spells, with the winds moderate from the west. Lower down the island, northwesterlies will freshen about Wellington and become strong in the evening along with thickening cloud, and things will worsen overnight.

On the East Coast, northerlies will pick up in the afternoon, but it will stay mostly sunny, as any early cloud should clear before long.

It’s looking cloudy in the west as those northwesterlies strengthen, with rain spreading north from Fiordland in the late afternoon. Elsewhere in the island it’s looking fair, mostly sunny with some high cloud developing during the day, and northwesterlies gusting pretty strong by evening in all inland areas. Gusty northwesterlies will develop about most coastal areas by late afternoon, and conditions will worsen overnight, and into Sunday.

West to northwest winds about Southland will likely be quite strong, with gales at times – especially late afternoon and evening onwards.