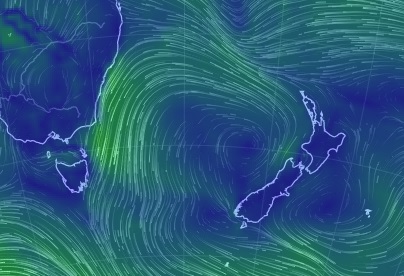 The ridge of high pressure which has dominated the country’s weather so far this week will continue to exert its influence – with slightly different results in each island.

Settled weather for much of the North Island – nothing more dramatic than patches of cloud.
For the upper North Island, it’s looking like starting with plenty of morning cloud, but then breaking to areas of mid and high level cloud by midday, along with light winds and afternoon sea breezes.
Northland and Auckland will see East to northeast winds for much of the day and mostly cloudy skies, although Auckland will likely see a few sunny areas in the afternoon, with the chance of a light shower or 2 in Northland late on.

About the Central North Island – mainly south and west of Lake Taupo – a few isolated showers could pop up late afternoon and into the evening, then clearing later.
Morning cloud breaks to a mostly sunny afternoon along the East Coast, along with east to northeast winds.

Wellington sees a mostly sunny day, and only breezy north to northwesterly winds.
The lower North Island can look forward to mostly sunny weather in general too, clear and sunny skies above.

It’s looking good in the south too, mostly sunny weather for the whole day – morning cloud aside.

Northwesterlies will prevail through much of the interior of the South Island, while southerly winds will work their way into Southland and Otago, bringing some late cloud to both regions.

The place to be

The warmest temperatures are likely to be about inland Canterbury, which will be under the influence of northwest conditions, making temperatures in the mid to late 20â€™s likely.
Right on the coast, east to northeast winds will keep temperatures down a little till evening, when northwest winds break through there.