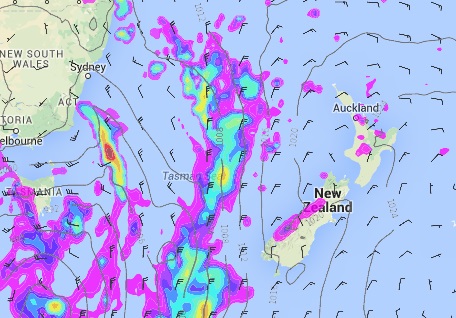 The “wall of rain” we have referenced in earlier forecasts will move onto the western side of both islands tomorrow, bringing some fairly dismal weather to the country’s New Year’s Eve celebrations.
Thanks to the mountains and ranges, however, only about half of this rain will make it into all centres.

For the upper North Island, skies are looking cloudy with northerly winds, and the odd patchy and isolated shower after lunch.
Dry spells will dominate for most of the day, however, with the chance of showers increasing as the winds change southwest overnight.

For the lower North Island, it’s a similar story at first, with cloudy skies and northerly winds, as showers move into western areas by late morning.
Winds will tend more northwest in the afternoon, and showers should ease off to clear – though these will be back again – especially about Taranaki – by evening.

For the East Coast, high cloud and northerlies are the order of the day, (gusting a bit rough about Wairarapa and southern Hawke’s Bay), with temperatures around the mid 20s

Strong northwesterlies will dominate for the upper South Island, and the risk of a gale about Canterbury and Marlborough – though these will ease in the evening, for a slightly calmer New Year’s Eve.
Plenty of high cloud will prevail over the east coast, with any morning rain clearing into the afternoon.
Marlborough may see spells of rain right through until evening, though these should clear up well before midnight.

Rain will be heavy about the West Coast especially, though as with areas further north, this should clear before evening.

For the lower half of the island, it’s looking cloudy in the west, with heavy falls easing to showers by afternoon, and gusty west to southwest winds.
Southland will see any early spells of rain clear by midday, though in the afternoon things will turn nasty – a southwest change could bring hail along with heavy showers.

It’s a similar story in Otago, with morning rain clearing, then returning with a southwest change in the afternoon.
Later in the evening, the winds will tend more southwesterly, and bring a greater risk of showers around the coast.