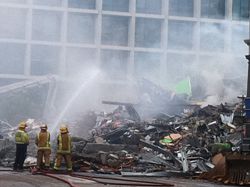 Mike Yardley is the host of Newstalk ZB’s local morning show in Christchurch and the presenter of CTV’s Newsmakers. This is his account on this week’s earthquake and the loss of his CTV colleagues.

I was just leaving Newstalk ZB’s building for the day when all hell broke loose. Fast-footing it in the middle of Worcester Street, I watched in raw terror as the Christchurch Club collapsed in front me.

A blood-soaked woman emerged out of the storm of dust and debris and after I assisted her to Latimer Square, it soon dawned on me that much of the city center was raining down on its citizens.

Gazing to the south of Latimer Square, a billowing column of dust blocked any view of the CTV building. It wasn’t until later in the day that I was confronted with the brutal reality that the dust wasn’t blocking the view, but it was the dust of the building’s remains.

After frantically ensuring my family members were all safe, and taking stock of my own smashed-up house, my thoughts and prayers have been transfixed on my CTV family.

For the past 10 years, the regional television channel has been a trusty employer for me, broadcasting my weekly current affairs program. At the time of writing, it would be inappropriate for me to name all of the staff that have been killed in this mass tragedy. My heart has been torn by the unwieldy weight of grief, as I reflect on 17 much-loved workmates who I will never share a TV studio with again. Seventeen passionate, resolute workmates who believed in regional television and made it work.

CTV was not just “a shopping channel,” as some people have scoffed. It served as a mirror on our region and that mirror has been so grotesquely shattered. And CTV has been the career launch-pad for dozens and dozens of TV journalists, who now appear on our nightly network news programs.

CTV was the longest-running television channel in New Zealand, and although it will never be the same, it will rise again to serve our region. It must.

One day at a time.

Like many Cantabs, my mind is haunted with the apocalyptic scenes of our devastated city. I am sick to the pit of my stomach at the wrenching loss of life and casualty toll. Why did so many modern buildings implode? In hindsight, were we too impatient and “she’ll be right” in agitating for the city center to return to “business as usual” so soon? How long should it be closed for now? What will it take before people trust our city center, and feel safe in the buildings that remain? How many people will trust the land they have lived and worked on?

I know many Cantabs who simply cannot take it anymore and have abandoned the city they love, indefinitely.

There are no fast solutions. For tens of thousands of folk, even securing basic services like power, water and sewage is going to be a marathon wait.

Just as the Ellerslie Flower Show has been understandably cancelled, Christchurch’s share of the Rugby World Cup does not look viable. Where will people stay? How fast can AMI Stadium be repaired? Should resources be diverted from key infrastructure work for the sake of this rugby tournament? There are so many questions and clouds of doubt.

As much as we are exhorted to uphold our plucky, resilient spirit, I have huge fears about how much repair and rebuilding work can be done in time for winter. Can our viciously wounded city continue to support and sustain 400,000 people while major infrastructure and rebuilding work is undertaken? How can we seriously house everyone?

I suspect a substantial portion of our population will need to relocate out of Christchurch, in the medium term, while the large-scale reconstruction work is carried out. Christchurch will rise again, Christchurch will shine again. But the slow road to recovery is going to be herculean.