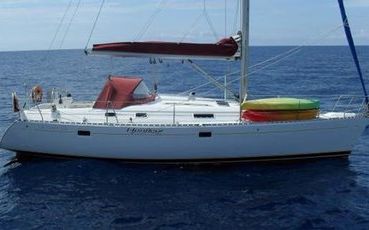 It was spinning slowly in circles off the Bay of Plenty coast – the motor running and anchor dragging. But the 11.6m yacht Honfleur was deserted, her skipper nowhere to be found.

As mystery surrounded the disappearance of experienced sailor Richard Rusbatch, 56, his family were last night pinning their hopes for his survival on his strong swimming abilities.

Mr Rusbatch set sail on his yacht from Tauranga on Sunday, bound for Paihia in the Bay of Islands. But the deserted, under-motor yacht was found by a member of the public yesterday, about 20km east of Mayor Island in the Bay of Plenty.

Despite an aerial search of a 900sq km area between Motiti and Mayor islands, there has been no sign of Mr Rusbatch, a charter operator based in Russell. A sea search was also under way involving Coastguard and a vessel that has been working on the nearby Rena salvage operation.

A dinghy was later found some distance away and police sailed the Honfleur back to Tauranga.

The Pukaki vessel searched the shoreline of the island last night, and was now searching an area further out to sea, he said.

The Tauranga Coastguard was this morning heading out with a Land, Search and Rescue team to search the island.

He said the sea state was “ok” today, but visibility may be affected by rain forecast for the area.

Mr Rusbatch’s sister Jane Willing told the Herald the family were hoping Mr Rusbatch, who has several daughters, had made it to land.

“He’s a very strong swimmer and he’s used to being at sea. So, I’ve just got my fingers crossed, with his daughters, that he’s swum somewhere – to one of the islands. That’s what we’re hoping for,” she said.

Mr Rusbatch runs charter trips between Russell and Tauranga. Mrs Willing said he had been running his charter business for “many years”.

An online advertisement for a day trip on the Honfleur says the vessel has a “great layout for day sailing”.

“You will sail as much as possible and tuition is part of the parcel of the trip. Troll for fish as you sail, you are welcome to take your filleted catch with you. At lunch time stop at one of the many islands, go exploring, swimming and snorkelling.”

Sailors are also offered a lunch of seafood, salad and fresh vegetables on their voyage.

Neighbours in Russell were shocked when they heard about Mr Rusbatch’s disappearance.

“I heard it but I didn’t know if it was true,” said one woman. “I wondered where he’d gone, I haven’t seen him for a few days.”

“But it doesn’t sound too good, does it?” she said.

Mrs Holmes said Mr Rusbatch lived alone and had been in his house in Russell for about 10 years.

“I never had much to do with him, but he’s a nice neighbour. He’s a nice man. It was a shock to hear it.”

Inquiries are continuing in an effort to determine whether the unnamed dinghy located by police last night may have come from the Honfleur.

Police were urging anyone who had seen the Honfleur since Sunday, after it left Tauranga, to contact them urgently.

April 2007: The 9.8m Kaz II was found drifting off the northern coast of Australia. The three men on board were never found. Authorities boarded the yacht and said it was in good condition and laid out as if the crew were still on board. The table was set, including food, a laptop computer was set up and turned on, and the engine was running. The only signs, other than the disappearance of the crew, that anything was out of the ordinary were damage to one of the boat’s sails and that there was no life raft on board.

March 2010: Paul Janse van Rensburg’s 11m yacht Tafadzwa was found adrift after 16 days, near the Chatham Islands with its damaged sails still up. Two fishermen boarded the vessel and found his life raft, and dog – still alive – but no sailor.