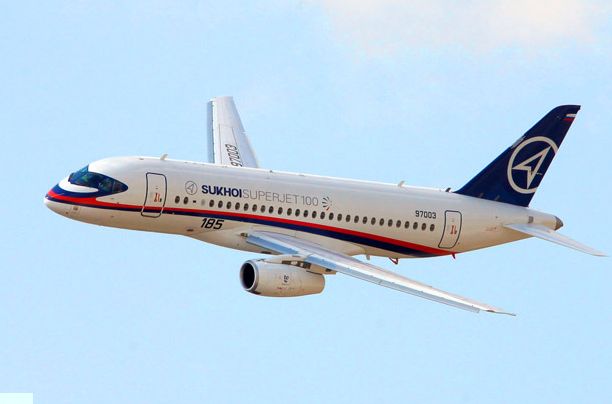 UPDATED 3:48pm — The wreckage of a Russian passenger airliner that went missing during a demonstration flight over Indonesia has been found in a mountainous area, a local official said Thursday.

Ali Umri Lubis, the mayor of Bogor, in West Java, said that parts of the Sukhoi Superjet 100 that disappeared off radar screens on Wednesday had been located. But he didn’t provide any information on the passengers who were on board.

Rescue workers on the ground who have been searching for the plane have not yet been able to reach the wreckage.

President Susilo Bambang Yudhoyono of Indonesia said in a brief televised address Thursday that there was a strong possibility that the plane had crashed into Mount Salak, a volcano south of Jakarta.

However, the number was in dispute. The Indonesian National Search and Rescue Agency said only 37 of the 42 invited passengers were on board. Russian state-run news agencies reported 44 people were on the plane.

The plane was on its second demonstration flight Wednesday when it lost contact with air controllers at Jakarta’s Halim Perdanakusuma Airport.

“The first demonstration flight in the morning went smoothly,” said Sunaryo, who uses only one name. “There were no problems.”

On the second flight, the plane began making its descent but vanished from radar screens at 6,200 feet in a mountainous area.

The plane lost contact with air traffic controllers at 2:12 p.m., 21 minutes after taking off, said Marsda Daryatmo, head of the search and rescue agency. Two helicopters were immediately sent out to search for the plane but had to return to their bases due to strong winds and unpredictable weather.

The Sukhoi jet arrived in Jakarta as part of a demonstration tour of six Asian countries. It had been to Myanmar, Pakistan and Kazakhstan, and was due to visit Laos and Vietnam after Indonesia, said the Russian news agency RIA Novosti.

Sukhoi manufactures military aircraft and is known especially for its fighter jets. Its civilian aircraft is narrow-bodied with a dual-class cabin that can transport 100 passengers over regional routes. It flew its maiden flight in 2008.

In March, a Superjet 100 operated by Russia’s Aeroflot Airlines was forced to abandon its flight to Astrakhan, Russia, and return to Moscow because of problems with the undercarriage, according to RIA Novosti.

A similar defect in another Aeroflot-operated Superjet 100 plane had to be fixed in Minsk in December.