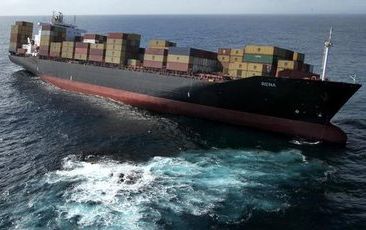 A massive oil spill from the stricken cargo ship off the coast of Tauranga has become New Zealand’s worst ever maritime environmental disaster, the Government says.

Environment Minister Nick Smith this afternoon said oil had poured out of a new puncture in the Rena at “fivefold” the rate it had in the days after the ship grounded on Astrolabe Reef.

He said significant amounts of oil would start washing up on beaches around Mt Maunganui from tomorrow and into the coming weeks.

The “tragic” spill was inevitable since the Rena grounded carrying 1700 tonnes of oil at 2:20am last Wednesday, he said.

He promised the Government would hold those who were responsible for the grounding to account.

The crew on the stranded cargo ship Rena would have been fearing for their lives when the vessel tipped by about 4 degrees overnight, the union representing New Zealand maritime workers says.

The 17, mostly Filipino, crew members issued a mayday call when the ship crushed the reef it was resting on and shifted back a few degrees from its 10-degree list.

One of the crew suffered minor injuries when they were bundled onto transport this morning and taken to Tauranga Airport, where they are off-limits to media.

Non-essential crew had been taken off the vessel as a precaution earlier.

TV ! showed an item of a CHCH firm that manufactures wool booms that have been used successfully throughout the world. Why, when the company is local and has a proven track record of success,is it not being requested to supply these environmentally safe and effective booms to this particular oil spill? Why have NZ Govt. and in particular Maritime NZ sat on their hands over this?I am astounded at such crass and stupid inaction in the first three days of the unfolding disaster. It proves that both the Govt. and Maritime NZ are lacking in courage and leadership. The same frozen mindset prevailed in the first few crucial hours at the Pike River coal mine disaster.

Those are my thoughts exactly Peter.