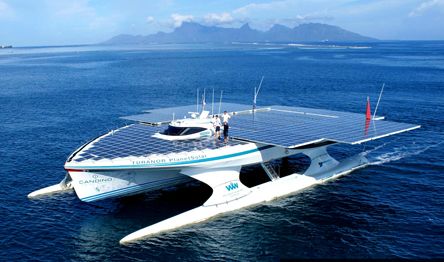 After almost 250 days at sea, the world’s largest solar-powered boat has made it half way around the globe to the shores of Brisbane, Australia, propelled by nothing but rays from the sun.

The 31-meter “Turanor”, which more closely resembles the “Starship Enterprise” than a practical yacht, set sail from Monaco back in September 2010 on its voyage to become the first fully solar-powered vessel to circumnavigate the world.

“So far everything has gone according to plan,” said the Swiss-born skipper and former mountain guide Raphael Domjan. “By making it this far we’ve already demonstrated the huge potential for high-performance solar mobility — and we also hope we’ve inspired others to have more faith in renewables.”

The 60-ton vessel — which is dotted with over 536 square meters of photovoltaic panels — can sail for up to five nights without direct sunlight, supported by reserves stored in the world’s largest rechargeable lithium battery.

“Before we set out, this was one of my greatest fears — that we would be without sunlight for so long we’d run out of battery and end up stranded in the middle of the ocean,” recalled Domjan, who is joined on board by Gerard d’Aboville — the first man to row across the Atlantic and the Pacific — as well as two additional engineers.

However, the skipper is proud to reveal that the battery has never dipped below 20%. “We are very happy with the performance of the boat,” he said. “Although it is going a little bit slower then expected in good conditions, it is much better with difficult weather.”

The $16 million vessel is a “catamaran,” a type of craft with two hulls, which saves energy by slicing rather than riding the waves. But despite its streamline design, the shark-shaped ship travels at an average speed of just 7.5 knots — about that of a large ocean liner.

So how do the crew keep themselves occupied on those slow-going crawls across vast expanses like the Pacific?

“Constantly we are monitoring weather forecasts to keep in line with the sun, plotting our route, examining wind, wave and current predictions, communicating with other vessels on the satellite phone, updating our blog and logging our positions,” he said.

“Turanor” — so-named after a word that means “power of the sun” in J.R.R. Tolkein’s “Lord of the Rings” trilogy — has so far stopped at Miami, the Galapagos Islands and Cancun, in Mexico — the latter during the United Nations World Climate Conference.

And along the way she has already broken two world records.

“We have made the fastest crossing of the Atlantic Ocean by a solar boat and the longest distance ever covered by a solar electric vehicle,” said Domjan.

“But what continually makes me proud is that everything we do on this journey is, in a sense, a world first. Just traveling from one point in the ocean to the next is a record because nothing like this has ever been done.”

Having finally arrived to a warm fanfare in Australia’s east-coast city of Brisbane, Domjan relates that his greatest pleasures on dry land are simply a good meal and a decent night’s sleep.

“I’m just sitting down inside a fantastic restaurant as we speak, which is a real joy for me … and of course it’s always a pleasure to sleep on a bed that isn’t moving!”

Despite months of sleep deprivation and rationed diets, the 39 year-old skipper quips that the biggest challenge of the whole project was finding a financial backer in the first place.

However, while everything has gone to plan so far, Domjan is far from complacent about the remaining leg of the journey, which he expects to complete by April 2012.

“It’s been so long and yet we’re still only half way,” he said. “I just hope when we finally make it back to Monaco, the world will be a few steps closer to embracing the greater practical uses of solar power today.”