Home > News > Wintry blast due to hit later in weekend...

Wintry blast due to hit later in weekend 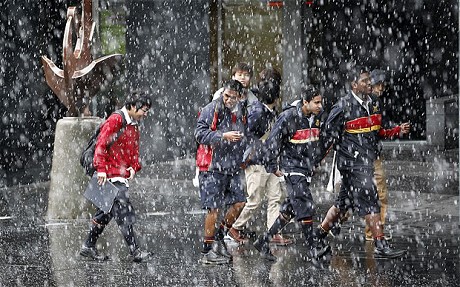 The last three weekends have all had particular themes ranging from the wettest to the warmest for the year and now this weekend bucks the trend because by late Sunday it looks to be the coldest.

Earlier this week it appeared the bitter southerly change was scheduled for Saturday however the active frontal system has slowed down and it’ll be the second half of the weekend when it starts to turn to custard.

This does look as if it’ll be the chilliest outbreak we’ve seen for 2013 so far and the South Island is set to cop the polar blast for starters.
Showers, heavy at times, containing rain, hail and sleet is set to appear Sunday morning over the deep south before heading northwards affecting both West and East coasts along with a harsh, blustery southerly.
Snow should fall to fairly low levels across Otago, Southland, the Canterbury foothills and Banks Peninsula could cop some of the wintry falls.
“The wind direction plays an important part on where the wettest and snowiest skes will be” according to weather analyst Richard Green. “if the wind is slightly more west than southwest the Canterbury plains are protected and the West Coast gets the most unsettled weather as well as the far south but if it’s more southerly or southeasterly which the latest data predicts it will be then it’s geared to funnel in across the plains and bank up over the foothills”.

The North Island should see the drama unfold later on Sunday and even ahead of the front it’s not all blue skies as a westerly flow sees showers pepper western and northern districts.
“It’s easy to forget that Saturday will actually see some wet stuff over the upper north but further south it’ll be quite warm in the east with the twenties more than a possibility” says Mr Green.” But often when the thermometer is above twenty degrees at this time of year it’s what follows that can make some people nervous as a wintry spell tends to follow”.

WeatherWatch sees any showers falling mostly over parts of the North Island today as Mainlanders already had their turn yesterday or last night.A few areas of patchy rain or drizzly showers could affect the northeast Mainland at first this morning though. Localised heavy showers could hit again this morning over the lower North island but gradually ease and then clear later.
Temperatures today for many centres over central and southern districts will be on the coolish side before warming up over a number of regions tomorrow.