Winter’s not done yet – more heavy snow on the way 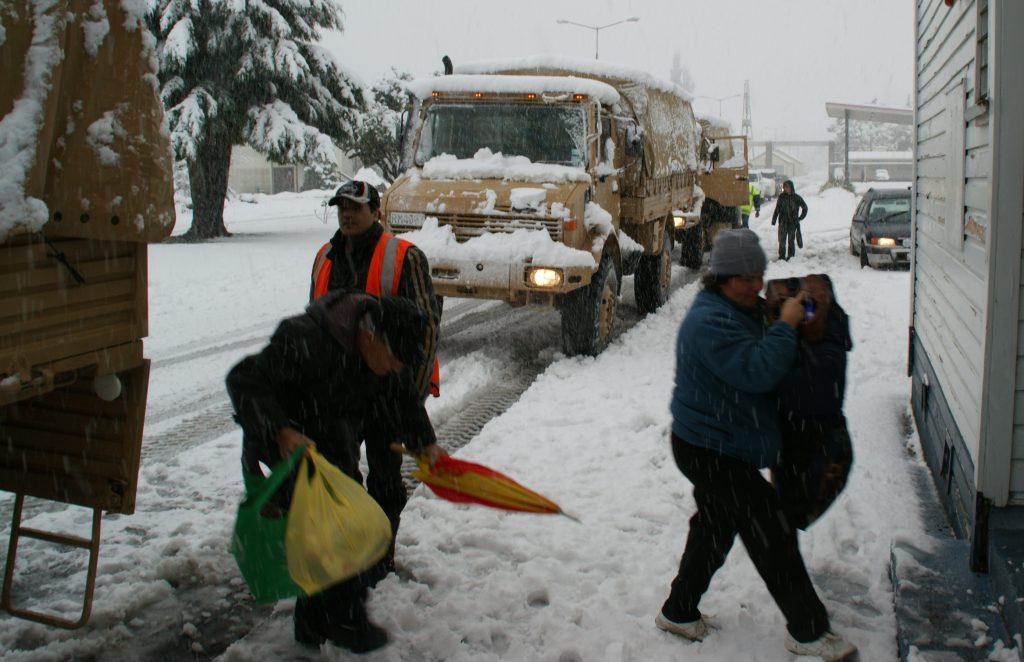 Motorists will hopefully be earlier warned for the next snow storm – 900 people were caught off guard by the once in 25 year snow storm.  Image / NZ Defence Force.

Just days after a major snow storm across the North Island it’s looking likely that another snow storm is on the way – but this time for both islands.

In Metservice’s severe weather outlook issued Wednesday afternoon the government forecaster had “moderate confidence” that heavy snow would affect North Canterbury and Marlborough down to just 200 metres on Friday with heavy snow again for the Central Plateau, Hawkes Bay and Wairarapa ranges, down to 500 metres, on Friday or Saturday.

WeatherWatch.co.nz head weather analyst Philip Duncan says winter is not done yet.  “We are definitely in a new weather pattern which started around mid-September and could take weeks before it changes again.  This could be number two from a handful of snow storms, or rain storms, to affect New Zealand over the next month or so”.

Mr Duncan says the predicted snow storm could be another financial blow for farmers still counting the cost from this weeks cold snap.  “Farmers in the east coast of both islands have had a tough couple of years with droughts and floods.  Now it seems we can add snow storms to that list too”.

But there is some good news.  Despite the predicted cold snap conditions should quickly clear again.

“This is spring, this is very typical weather.  We just had a quiet spring last year” says Mr Duncan.

Snow in Twizel – will we need chains? We have a Honda Odessey & are going to Twizel, Queenstown & Dunedin this coming week, starting tomorrow

Not too sure but please check out the latest road conditions with Transit.Ice will be more of a concern we believe.

we are leaving for Hastings from Auckland this afternoon with a stop in Hamilton first, i was just wondering will the Napier-Taupo road be open?

It’s very hard to say as it can be quite borderline as to when it will start but at this stage we’re expecting the road to be open this evening as the air is still very warm around the central North Island as a warm front has just passed over – snow is likely very late tonight or more likely in the early hours of Saturday morning at this stage.

In saying that, we suggest all motorists travelling across the central North Island from 5pm to check road conditions with the AA before leaving and the latest weather and news reports on NewstalkZB.

We are heading from Nelson to Christchurch I expect snow on Lewis pass but is the Kaikoura route clear?

At this stage we haven’t heard any problems with the Kaikoura route.  Best to keep up with the news with NewstalkZB and also check with the AA.

If we hear anything we’ll post it here as soon as possible.

We are trying to get to Auckland leaving Napier around 6pm friday night. Will we beat the snow???!
Would it be better to go via the desert road??

We would suggest the Napier Taupo highway as it’s a lower altitude road (by a few hundred metres).

Best bet is to check with the latest weather forecasts just before you leave but at this stage NT Highway would be the best option.