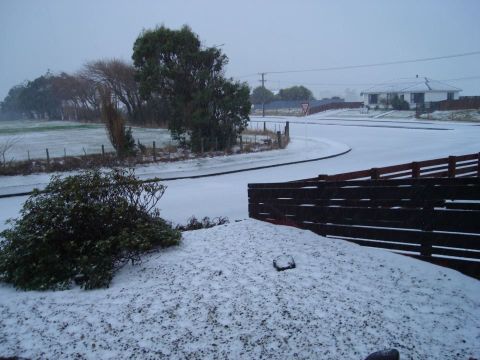 The winds will strengthen for many regions today, more squally showers are predicted and snow will continue to fall to very low levels as a moderate winter storm continues to affect New Zealand.

WeatherWatch.co.nz forecasters say winds will actually build for the South Island today and into Thursday with a chance of severe gales in areas that missed them on Tuesday. 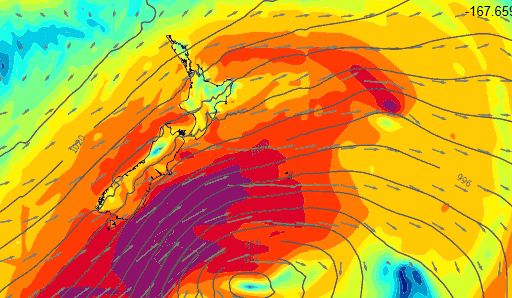 “The low is changing shape, starting to lose that perfectly circular shape and that basically means the strong winds that were once near the centre will ease a little but stretch over a much greater space” says head weather analyst Philip Duncan.

Map – the purple indicates where the hurricane force/severe gale winds lie, again it’s borderline for the lower South Island.  This image is for midnight Wednesday / www.Weathermap.co.nz

“There are a couple things going on here, firstly the deep low to the south of New Zealand and secondly the large high over Australia – both are contributing to the blustery conditions”.

Mr Duncan says while it will be windy in many regions across Wednesday the winds are likely to strengthen significantly around coastal parts of southern New Zealand, mainly around the Catlins and coastal Otago.

Winds will continue to blow into Wellington from the west or north west then swings southerly on Thursday.  Despite the nor’wester it’s not likely to be warm with a high of just 11 degrees for Wednesday,

Meanwhile more snow is in the forecast for today in the lower South Island and right along the Southern Alps.  Snow is also predicted by WeatherWatch.co.nz for the Desert road across Wednesday as well. 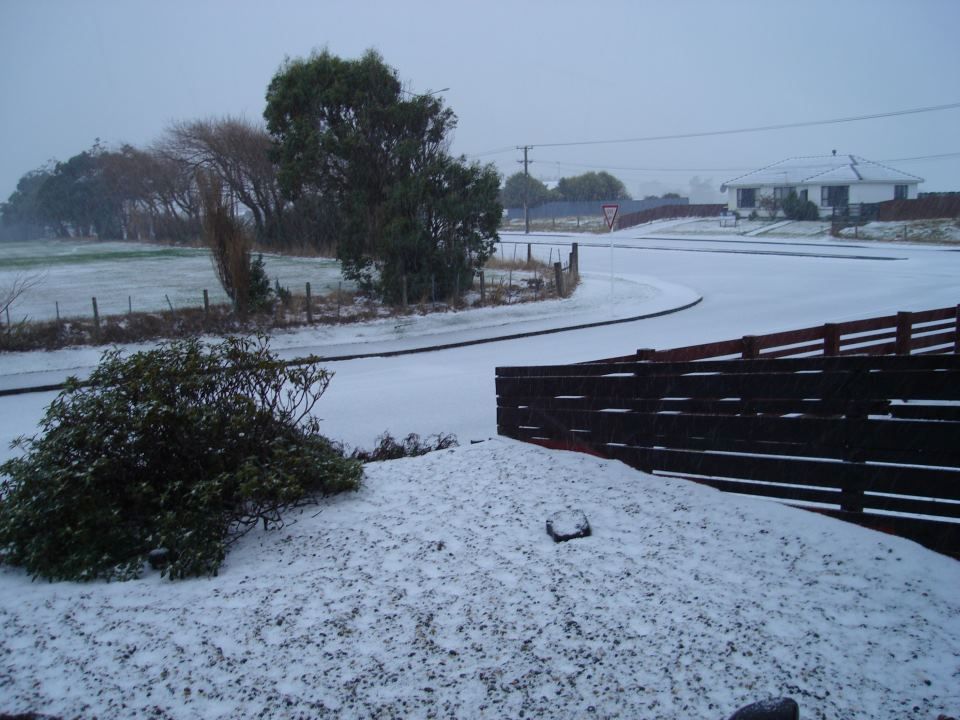 What are conditions like where you are right now?  Let us know by posting a comment below!

Hints of sleet in some steady rain 30 minutes west of Nelson. Temperature has dropped to a shade under 5degs. Main cloud base quite high at around 3500ft so it’s really cold air for this side of the hill. Light snow to around 250 metres last night.

Have had the occasional heavy shower in the naki’ with some hail earlier in the morning, sposed to get worse this arvo I hear

So far in this morning in Raetihi (Central Plateau), we have had rain, sleet, sun, sleet, rain…etc. It has been snowing in Ohakune (11kms away), but not quite here…yet!

Wellingotn having its 3rd consecutive sunny day (Monday and today clear from dawn – Tuesday after about 9.30). Perhaps cloudier for a while this afternoon.

With the High to the W and the Low to the SE… what’s the chances of Motueka seeing some more of that action we saw last July/August? Snow has already landed rather low on the foothills of the Kahurangi ranges… but is there any chance it may touch the ground a smidgen lower?
Cheers, Michaela

Hi Michaela, t’s a little bit different to last July/August as the cold air will actually start to ease today, maybe rising 1 to 3 degrees which will lift the freezing level.  So close, but unlikely to get any closer at this stage.

ohhh well what a shame… 🙁
we shall be patient then and hope that maybe one day it will repeat itself. I will let you know if there is any change at our end, when… (or if) that day ever arrives 🙂 WW will be the first to… (s)know! 🙂