Winter kicks off with warmth 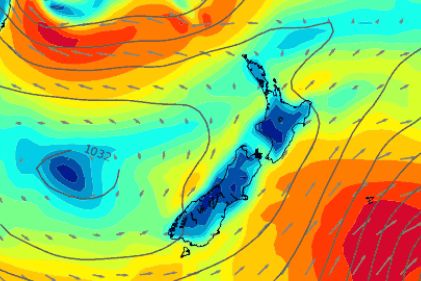 Today is the official start to winter but tell that to the weather, with highs today in the mid to late teens for almost every main centre says WeatherWatch.co.nz.

Northern centres of both islands will be warmest, with highs in the late teens.  Many other centres are expected to climb into the mid teens (15 to 17) across the nation as a large high pushes in across New Zealand with the centre heading towards the South Island.

On the northern side of this high easterlies are today expected to develop over Northland, Auckland, eastern Waikato and Coromandel Peninsula ahead of an incoming low this long weekend.  While they won’t be especially warm they will lift daytime temperatures by a couple of degrees and overnight lows by several degrees by the end of the week.

Only Southland and Otago are expected to be cooler – but barely – with highs of 12 to 14 expected today and light winds it should be a pleasant day in the deep south too.

WeatherWatch.co.nz says the first week of winter will be mild especially in northern New Zealand as this incoming low approaches and winds tilt more to the north.

A northerly flow is expected across all of the country this weekend lifting highs into the low 20s for some areas.

Meanwhile next week starts off with a nor’west flow which may lift temperatures even higher in eastern areas.

A warm week is expected next week but the latest long range models are still conflicted about a possible cold change for next weekend.  Some models are indicating another low in the Tasman could extend the warm, wet, weather while other models show a cold sou’west change spreading up New Zealand.

At this stage we’re still focusing on a nationwide cold snap for next weekend, but we’ll keep you posted.