Winter in Christchurch? Hail turns city white along with other SI centres 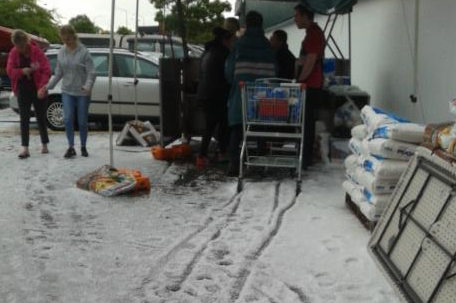 The streets of Christchurch have been painted white with hail.  MetService issued a severe thunderstorm watch for Christchurch and the surrounding areas just after 2pm this afternoon.

“These thunderstorms are expected to be accompanied by very heavy rain, large hail and possible tornadoes.”

MetService said there was a moderate risk that one or two of the thunderstorms could become severe and produce large hail of 20-30mm in diameter.

Timaru and Alexandra have also been affected with Ashburton being hit by a thunderstorm around 3:45pm says WeatherWatch.co.nz.

Social media users made the most of the unusual December weather, posting pictures and videos of Canterbury’s very own white Christmas.

Bob Reynard wrote that there had been a “massive hailstorm” in the Christchurch suburb of St Albans.

The hail storm was also felt wider in the region, with Brad Dennison writing on Twitter: “Massive hail stones in Timaru!!!”

“There was a huge thunderstorm. The sky turned black and there was thunder and lightning and it looks like a white Christmas.”

She took photos of the hail, that covered her back lawn and garden and looked like snow.

Although the hail was large and heavy, it had nearly melted an hour later.

You can view all their tweets and photos on the NZHerald homepage: www.nzherald.co.nz