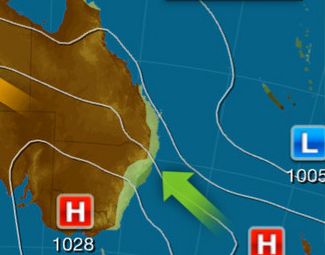 An end is in sight for Queensland’s unseasonable warmth as a cooler air mass creeps towards the state.

Temperatures today from Mt Isa to Brisbane will climb three to six degrees above average, making it feel more like a late April’s day than the start of winter. This will continue a month-long spell of above average temperatures for much of the state.

The recent turn of the season warmth has arisen from lack of cold fronts reaching QLD since early May, thanks to stubborn areas of high pressure over the nation’s southeast. However, more typical wintery weather is just around the corner.

A large high pressure system building over southern Australia today will gradually edge east over the next few days. As it does so, this system will slowly inject cooler air into QLD, allowing days to become progressively cooler between tomorrow and the beginning of next week.

Brisbane is on track to recording its warmest first week of winter in more than a century, before temperatures drop closer to the June average on Monday and Tuesday. Based on the current forecast, Brisbane will have reached 24 on each day during the first week of winter, which has not happened since 1902.

Further west, Charleville should only reach the low twenties on the weekend, making it the coldest pair of days in about a month.

Mt Isa’s 30-degree maximum tomorrow will be five above the June average, however on Monday the mercury should only reach 25 degrees. This will be the coolest day since early May and the first average-maximum in as long.

Longreach reached 30 degrees today for the first time this early in winter since 2003.

As the cooler air mass combines with cloud and possibly showers along parts of the coast this weekend, some places may have the coolest day since early autumn. Ayr is forecast to reach a top of 25 degrees on Sunday, which would make it the coolest maximum since March.

Looking further ahead, a warmer air mass should filter back into the state during the middle of next week, allowing temperature to push above average once again. For most of the state this wintry start to the week will soon be forgotten.

Warmer than usual days are likely to be a common occurrence over much of the state this winter, thanks to an impending El Nino currently brewing in the Pacific Ocean.