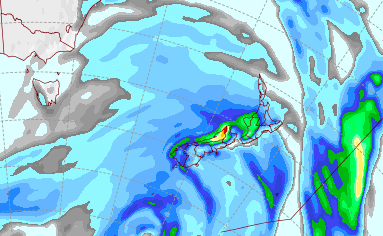 We’re in the final stretch of November and while this week has been like summer in a number of regions under clear blue skies and scorching heat we have to inform you the spring pattern is definitely not finished with New Zealand yet.

While it’s a colder day in many southern South Island centres today tomorrow is looking warmer. For example our high for Dunedin is 12 degrees today (and it will be lucky to even reach that) tomorrow sees the nor’westers returning and the temperature bouncing back up to 21 degrees.

Dunedin is a good place to focus on – as it’s a suitable location to monitor the temperatures as once Dunedin’s temperatures start to calm down you tend to find all of New Zealand starts to settled down into a more summer-like set up.  Dunedin has highs between 13 and 21 degrees over the coming 10 days, for example, showing the unsettled side of spring is still with us.

Meanwhile further north and in the earthquake zone of North Canterbury and the Kaikoura Coastline the weather is also going to slowly go downhill this weekend. Winds will rise to gale force in the mountains and while mainly dry there is some heavy rain from the West Coast that looks intense enough on Sunday to spillover into the mountains and ranges west of Kaikoura and north and north west of Hanmer Springs.  This extra rain will be something Civil Defence will be closely monitoring due to slips and quake formed dams in some valleys.

Northern New Zealand doesn’t escape this changing weather pattern either – although Northland is certainly surrounded by the most high pressure and therefore calmest weather with Auckland on the fringes.

By December 1st the nation looks to be affected by high pressure and easterlies – but we’ll locked in December’s forecast in more detail early next week.