Home > News > Windy weather in south of both islands t...

Windy weather in south of both islands today 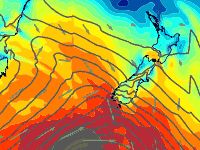 Strong to gale force winds are yet again returning to southern regions of both islands today reports WeatherWatch.co.nz.

The weather news authority says the next few days will feel spring-like with the blustery winds and temperatures slowly dropping.

Most exposed to the strong winds will be Southland and Wellington, but inland areas around the Southern Alps and parts of Otago, Marlborough and Wairarapa will also notice the building winds.

WeatherWatch.co.nz believes gales or near gale winds will affect Invercargill and Wellington while gusts in more exposed places may top 100km/h.

Head weather analyst Philip Duncan says motorists should expect strong gusts on the roads Thursday.  “If you’re driving around Southland and Otago and Wellington and Wairarapa be prepared for strong gusts, especially on or near the ranges”.

But Mr Duncan says the winds should be mostly under the threshold for damage.  “Winds of 100km/h in these southern regions of both islands tend to cause very few issues.  A few branches may break, so people should be aware of that”.

According to the public wind maps at WeatherWatch.co.nz the winds will be strongest around Stewart Island and coastal Southland and Otago on Thursday.

The strongest winds will ease back on Friday and Saturday but will return as a more widespread southerly on Sunday and Monday.

Well this weather pattern is getting most confusing, had cool easterlies all yesterday & this morning was like the first signs of Autumn, still, fresh temp around 11 deg and a very heavy dew looking like a light frost. Cars parked on roadway were all glistening with the it just like early Autumn.

Had to put heating on for a short time, very very unusual.