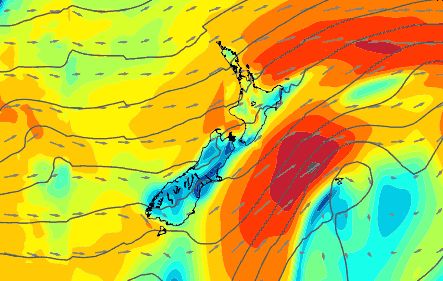 Gales and strong gusts have hammered some parts of the country for the past two days and continue to do so in some parts this morning, but should slowly ease back in a number of areas today predicts WeatherWatch.co.nz.

While conditions may still be blustery, especially along the west coast of New Zealand and around exposed parts of Auckland they should be easing back compared to Monday and Tuesday by the end of this afternoon.

The strong winds are being created by a large high to our north west and a deep low to our south east.  The resulting ‘squash zone’ of air pressure between the two systems lies directly over New Zealand.

But while the strength of the winds will slacken up today, they could build again for a time during Thursday and Friday in many regions.

Yesterday WeatherWatch.co.nz predicted up to 10 more weeks of windy weather as spring gets underway.

The weather news authority says while there will still be significant lulls in the winds, eastern areas should expect drier, windier and warmer weather for the next few weeks while western areas will be wetter, cooler and windy also.

– Homepage image / Red indicates gales & strong winds by 6pm today – most of the wind will be to the east of the country / Weathermap.co.nz

Has the wind eased where you are today?  Tell us what’s happening weatherwise at your place today by posting a comment below!

They slackened a little,not quite as noisy as yesterday,still wet underfoot,last 2 days feels more worse than the worst winter weather did.

Here in Hamilton we have gale westerly & passing showers. I would say it is 40kts plus.