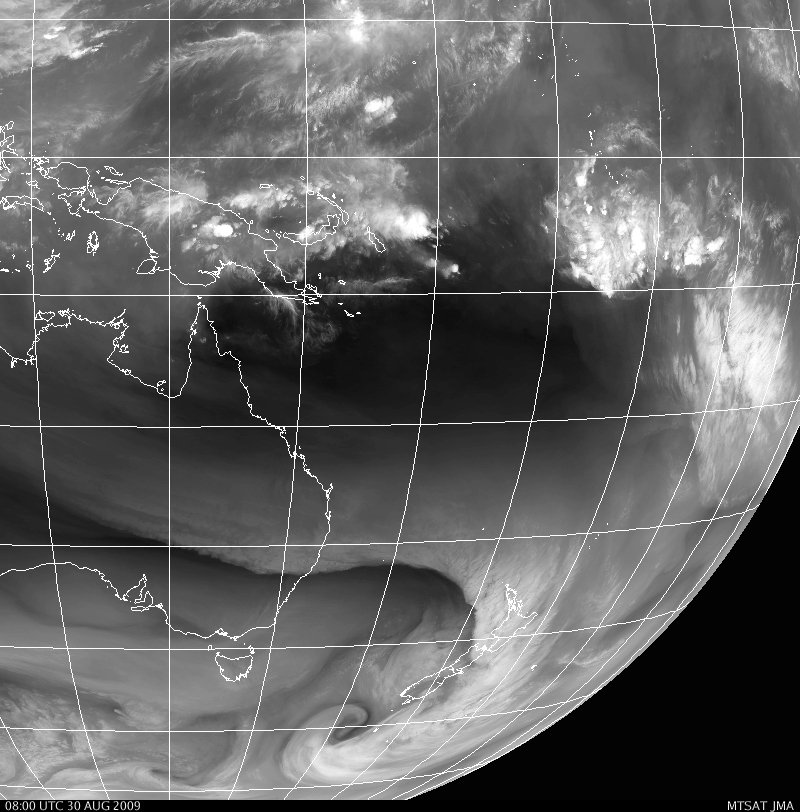 Gale force northerlies gusting to 120km/h in exposed places are hammering Wellington tonight as a deep low tracks near New Zealand.  Heavy rain is also affecting the capital with WeatherWatch.co.nz receiving unconfirmed reports of surface flooding in Wellington and small slips on State Highway 2 over the Rimutaka Ranges.

In the past hour winds have already gusted to 110km/h around coastal islands off Whangarei and around 100km/h in the Hauraki Gulf.  Gusts between 80 and 90km/h are affecting Napier City and the Manukau Heads.  In Auckland city winds are also on the rise and are expected to strengthen into early Monday morning.

Water vapour across the Tasman…the heaviest rain is just ahead of the clear spell (where it goes black).  Image / Japanese Meteorological Agency.

The humid northerly is keeping temperatures well up for this time of year – all main centres in the North Island were between 13 and 16 degrees last hour.

As predicted earlier this evening by WeatherWatch.co.nz forecasters the heaviest rain and the strongest winds are still on the way for North Islanders.  Rain has set in along the nation’s entire western coastline with heavier falls yet to come and gale force winds have now shifted north into Napier where gusts are reaching 85km/h with a warm 16 degree temperature.

The northerly in New Plymouth has lifted to near gale with gusts to 75km/h.

Head weather analyst Philip Duncan says heavy rain has really only just started to set in across the North Island with Wellington in for “hours of heavy rain”.  Heavy rain is also predicted by the Weather Watch Centre to set in across Central Plateau.

The heaviest rain is likely to spread into far west regions from Taranaki to Auckland to Northland in the next few hours but isn’t expected to cause any serious issues.

Overall the storm’s most severe weather is expected to affect central New Zealand and the east coast of the North Island as far north as East Cape.

Damage is predicted to be minimal however slips and localised flooding pose a threat to the Wellington region and motorists are advised to take extreme care tonight.

South Island weather analyst Richard Green says it’s been a warm and windy day in Canterbury but conditions have eased significantly tonight.  “As we said this morning we thought this event would be mainly for the North Island and top section of the South Island.  Heavy rain is likely to continue across Nelson and Marlborough overnight but the worst of the winds have been”.

The latest information WeatherWatch has is that the bulk of the winds are now shifting north of Wellington with Wairarapa, Hawkes Bay, Central Plateau, Gisborne and East Cape in the firing line.

Winds are now building across Auckland, Northland the Far North.  In the past hour gales have increased over the Far North with gusts over 90km/h.  A blustery northerly is gusting up to 90km/h on the Manukau Heads but the wind direction is meaning Auckland City is sheltered for now.  As the winds shift more north west (currently northerly) WeatherWatch.co.nz expects gusts to pick up to near gale force in exposed places.  This isn’t strong enough to cause damage however.

Our forecasters predict minimal damage from the spring storm as it quickly moves across the country tonight and tomorrow.

Winds are near gale force in Hawera with gusts to 70km/h.  Strong winds gusting to 65km/h are also affecting New Plymouth.

Around Wellington winds are gusting to 120km/h in exposed places, including State Highway 2 over the Rimutaka Ranges.

Check back for regular updates this evening.

So just how severe will this storm be?  WeatherWatch.co.nz head weather analyst Philip Duncan believes the North Island’s east coast and upper north east corner of the South Island will be most exposed to the gales with torrential rain in north and west facing regions.

“These winds are severe and may cause damage however the infrastructure in most of these regions can usually stand up to winds of this strength.  Our concern will be mainly around motorists anywhere from East Cape to Canterbury from the main ranges eastwards over the next 12 hours”.

Mr Duncan says gusts this strong can fell trees, blow high sided vehicles over, or off roads, and cause some damage to buildings.  “This is a pretty standard wind direction and wind speed for this time of year and while we don’t expect too much damage it is very important that people in the affected areas are aware these powerful winds will quickly develop today”.

Many areas remain relatively calm this afternoon as the low approaches from the west.

As of 4:30pm winds gusting to 85km/h were affecting exposed parts of Auckland with gales about the Far North and Hauraki Gulf.

In exposed parts of East Cape near gale northerlies are gusting to 75km/h.

Across Taranaki heavy showers are moving in with rain about to set in.  Mt Taranaki is helping boost gusts in Hawera with a 40km/h gusting twice as strong to 80km/h, in New Plymouth winds off the Tasman Sea are reaching 50km/h.

Winds have rapidly increased in Wellington with winds now officially gale force and gusts downtown reaching 110km/h.  Gusts up to 125km/h are blasting the hills around Wellington including State Highway 2 over the Rimutaka Ranges.

Canterbury has gusts over 70km/h with gusts estimated near 100km/h further inland near the ranges.

Overnight the depression quickly deepened and travelled south towards the lower South Island, pushing against a high to the north east.

The system is dragging moist air from the sub-tropics over many northern and western parts of the country.  MetService has issued several rain warnings from Bay of Plenty to the lower South Island.

20 degrees was reached as early as 11 o’clock this morning in Whangarei with several other regions climbing into the late teens nationwide thanks to the warm wind direction.  Since then Whangarei has fallen to 17 degrees with thicker cloud cover and more showers.

Napier is the warmest centre as of 2:30pm with 21 degrees.

Heavy showers are now moving in to several North Island regions, mainly northern and western.  The first rain band is now just off the Taranaki coast.

Winds are expected to peak after dark tonight and in to the early hours of Monday.  As Monday progresses winds should ease in the upper North Island but remain strong everywhere else – perhaps building further in the lower South Island.

It’s day 2 of the horrible weather. This wind is so strong that it split the back fence and the side fence (near the garage) in half didn’t get much sleep last night and the night before because of this weather. And it will continue until tomorrow night after looking at the weather via news. And this weather is making the doors rather and windows rather ene though they are closed I can’t wait until this weather is over so that I can get proper sleep.

Fair complaint Anecita, not having sleep due to the weather can be very stressful! We have good news and bad. The bad news it that again tonight looks windy, possibly even windier for some areas. However the good news is that by the end of Friday it will be easing and Friday night doesn’t look as windy and Saturday night looks calm. All the best for tonight!
Cheers
Philip Duncan

Just started to get some speed up 1 pm with heavy drops of rain, here at Matitaia Waiheke Island.
Westerly coming straight in and not ideal to go out on the water for any body except a windsurf or kite boarder. I can tell the wind has some punch to it that doesnt show on the weather maps… weird a bit different kind of thing happening. Cant really put my finger on.

Blowing a gail here in Matamata. Been some heavy showers of rain on and off.

Mamaku ranges. Rain pretty steady now, fairly heavy with rising blustery wind still from the n-nw with some strong gusts. pity the truckies driving over the Mamaku’s on sh5. they will be in for a tough time.

Been pretty still here on Auckland’s North Shore for much of the day, though we had a very heavy cloudburst around 2.30pm which had the street under water within minutes. Now raining steadily at 11.00pm but still can’t hear any wind. As we are on the south side of a hill I think we are probably being sheltered pretty well.

Not a lot of rain falling in Mamaku/Kaimai ranges. winds still nnw, possibly around 20-25 kph. Im thinking that perhaps the worst was further south and perhaps met service gave warnings for worse case scenario. Shall keep you posted

Very Wet an Windy in Wellington , Very heavy rain is now falling surface flooding on most roads , minor slips on the rimutaka hill , an very windy . Apparently heavier rain is yet to come could intersting if this continues .