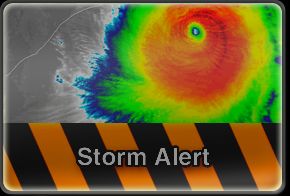 In the past hour gusts of 125km/h have been recorded in the Hauraki Gulf but winds are rapidly easing with the storm now pushing into eastern Coromandel and Bay of Plenty and towards East Cape.

The air pressure is around 981hPa however incredibly her winds remain sustained at 100km/h near her centre – category 2 strength.

Wilma is likely to cross East Cape late this morning with a strong south west wind pushing over the entire North Island,

As of 6am rainfall rates were very high across eastern Coromandel and Bay of Plenty and WeatherWatch.co.nz head weather analyst Philip Duncan says slips and flooding are likely to start affecting those regions.

“Wilma is still ferocious and packing a punch.  Her first movement is good, though, helping clear the rain in Northland and Auckland already.  The faster she moves the lower the risk of problems” says Mr Duncan.

“This is why WeatherWatch.co.nz has been monitoring Wilma for the past week.  Cyclones are very different to the usual storms we get here in New Zealand”.

Mr Duncan says numerous roads are closed and WeatherWatch.co.nz readers are providing invaluable updates on conditions in the upper North Island, with reports of boats ripped from moorings, roads closed and flooded and power being cut.

You can read the numerous eyewitness reports here