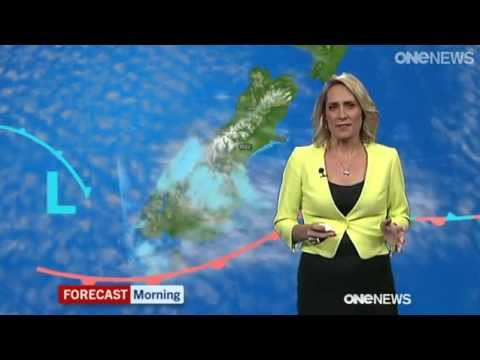 Karen Olsen has finally cleared up the cloud of rumours surrounding her exit from TVNZ after a 22-year career – she didn’t want to work weekends.

Olsen, 49, had stayed mum about the reasons behind her shock decision to leave her weather-presenting role at TVNZ. Until now.

She tells this week’s edition of Woman’s Weekly that changes to her role under restructuring at TVNZ meant she would be working more Saturdays and Sundays and she didn’t want to be away from her family.

“I didn’t want to sacrifice time with my children … our weekends are precious. They’re teenagers now and I’m not going to have them around for much longer,” Olsen tells the magazine.

“It came out of the blue and it wasn’t a decision I wanted to make – I love my job.

“I’m such a weather nerd that it was perfect for me. So it was quite sad.”

Olsen, who teared up during the interview while talking about her departure, said she had no hard feelings towards TVNZ and was looking forward to spending more time with her two children, aged 16 and 14, over the summer.

She planned to attend all their sports games, taken them camping over Christmas and “hang out with them” along with her husband Roydon, a pilot.

She also told Woman’s Weekly her exit had been so quick she’d had no time to find new employment, but she’d like to return to television.

“This has all been quite sudden, so I haven’t really had time to look into anything else. But I really do believe that when one door closes, another opens.”

Olsen announced her resignation on October 1 via a statement that said she’d loved her time at the state-owned broadcaster and praised the “amazing experiences and opportunities” she’d had.

“Reporting live from Antarctica five years ago was an absolute highlight and something I will carry with me for life. I’ve also enjoyed working with a really good bunch of people and will miss them,” Olsen said.

When contacted by the Herald at the time, she’d said she could “get in big trouble” if she commented.

“There’s a lot of that happening. It’s still a process that’s ongoing … I’m pretty sure it will all become clear in two or three days,” she said.

She continued to stay silent about her reasons for leaving even as she completed her last weather forecast for One News on November 16, ending a 22-year career with the network.

One News presenter Simon Dallow paid tribute to Olsen at the time, calling her “gracious, humble and warm and the absolute weather professional”.

Olsen’s departure comes as TVNZ restructured its newsroom, admitting there would be “some possible staff redeployment” and “an estimated eight to 10 roles impacted”.

No doubt, they wanted her to do weekends so that hand gesturing English man could be on all week.  I don’t care if he’s a trained meterologist, he’s a presenter so should just repeat the metservice supplied forecast instead of saying something totally different for some areas.

That “hand gesturing Englishman” is the best meteorologist/weather-man on television. Mrs. Olsen was merely a presenter offering no deeper knowledge or insight. Why would that be preferable? If you want metservice, the website is viewable at anytime of day…

As I understand it, Karen was a meterologist too.  Sorry, but as far as I’m concerned, he would be better off going back to metservice and working behind the scenes or at least get some advice on ceasing some of the hand waving.

Dan does a far better job and makes it more interesting. He has got real personality which is missing in many TV presenters.  I rarely watch TV weather as it is like watching a race commentary. The only time I’ll watch it is if something very severe is looming, but even then it only applies to the cities and not us. Apart from that pfft. More time needs to be given to TV weather. Weather impacts us all and can be destructive, so it is more important than news is. Yet media give it the very minimum of time, where you almost lose your breathe trying to keep up with it. Even MetService vidoes are rushed. Phil does the best job as he doesn’t sound like some race horse commentator. Long may that last.