Why this ‘boring’ weather is concerning some 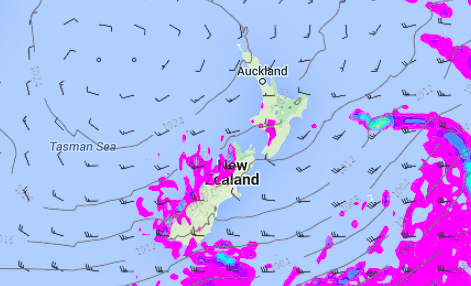 The past several days in New Zealand have been fairly ‘ho-hum’ weather-wise, with fewer extremes and plenty of cloud and wind.  Some people describe this weather as fairly boring, especially if you’re on the western side of New Zealand where gloomy clouds blown off the Tasman Sea have been a frequent occurrence.

But a boring forecast to one person can be a very concerning forecast to another. Many who farm along our eastern coastline find this weather worrying, as daily windy westerlies dries the soil out considerably.

Thankfully heavy easterly rain in late September has set many areas up in the east up for this drier, windier, month of weather.

Some more good news – there is a chance of rain in dry eastern areas this Thursday or Friday too – every top up helps.

But the general trend of day after day of windy westerlies, even if below gale force, creates an increasingly dry pattern in the east – and El Nino only fuels this further.

For now though, our pattern is so chaotic some moisture is making it up our eastern coastlines – but as we head through November these tend to fade.

The remainder of October sees a good variety of weather around NZ that should help keep conditions closer to average for this time of the year.