Why I’m dreaming of a white-noise Christmas 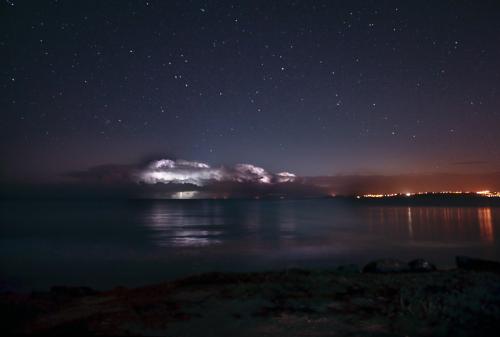 WeatherWatch.co.nz came across this blog at www.cnn.com – we wanted to share it with you.

CNN Editor’s Note: Simon Singh is the author of “Fermat’s Last Theorem,” “Big Bang,” “The Code Book,” and “Trick or Treatment: Alternative Medicine on Trial.” The following essay is taken from “The Atheist’s Guide to Christmas” published by Harpercollins.

(CNN) — While Christians celebrate the birth of Jesus at Christmas, atheists may wonder if there is another birth they might be able to commemorate.

One possibility is to give thanks for the arrival of Isaac Newton, who was born on Christmas Day 1642 according to the Julian calendar, which was still in use in England at the time.

Another possibility, and probably my preference, is to use Christmas Day as an excuse to celebrate the biggest birth of all, namely, the creation of the entire universe.

For tens of thousands of years, humans have stared up into the heavens and wondered about the origin of the universe. Up until now every culture, society, and religion has had nothing else to turn to except its creation myths, fables, or religious scriptures.

Today, by contrast, we have the extraordinary privilege of being the first generation of our species to have access to a scientific theory of the universe that explains its origin and evolution.

The Big Bang model is elegant, magnificent, rational, and (most importantly of all) verifiable. It explains how roughly 13.7 billion years ago matter exploded into being and was blown out into an expanding universe. Over time this matter gradually coalesced and evolved into the galaxies, stars, and planets we see today.

Before explaining how you might celebrate the birth of the universe, let me quickly explain why we are convinced that there was a Big Bang. First of all, telescope observations made back in the 1920s seemed to show that all the distant galaxies in the universe were redder than they should have been.

Red light has a longer wavelength than all the other colors, so it was as if the light from the galaxies was being stretched. One way to explain this stretching of galactic light (otherwise known as the “red shift”) was to assume that space itself was expanding. Expanding space is a bizarre concept, but it is exactly how we would expect space to behave in the aftermath of a Big Bang explosion.

However, this single piece of evidence was not enough to convince the scientific establishment that the Big Bang had really happened, particularly as the observations were open to interpretation. For example, the Bulgarian-born astrophysicist Fritz Zwicky pointed out the redness of the galaxies was merely an illusion caused by the scattering of light by dust and gas as it passed through the cosmos.

By the way, as well as being a critic of the Big Bang and the data that seemed to support it, Zwicky was also responsible for inventing a beautiful insult. If a colleague annoyed him, Zwicky would scream out, “Spherical bastard.” Just as a sphere looks the same from every direction, a spherical bastard was someone who was a bastard whatever way you looked at him.

A second pillar was needed to support the Big Bang model, and this time the crucial evidence relied on measuring the ingredients of the universe, most importantly hydrogen and helium. These are smallest atoms in the periodic table and the most common in the universe, accounting for 74 percent and 24 percent of all atoms, respectively. Crucially, the only way to create such large amounts of hydrogen and helium is in the wake of the Big Bang. In particular, the pressure, density, and temperature of the early universe would have cooked exactly the right amount of hydrogen and fused it into exactly the right amount of helium.

In other words, the Big Bang is the best (and probably the only) way to explain the abundances of these light elements. Nearly all the other elements were made later in collapsing stars. These stars provided the perfect environment for the nuclear reactions that give rise to the heavier elements that are essential for life.

Marcus Chown, author of “The Magic Furnace,” highlighted the startling significance of stellar alchemy: “In order that we might live, stars in their billions, tens of billions, hundreds of billions even, have died. The iron in our blood, the calcium in our bones, the oxygen that fills our lungs each time we take a breath — all were cooked in the furnaces of the stars which expired long before the Earth was born.”

The third, and even sturdier, pillar to support the Big Bang model is the afterglow that should have followed a creation event, which can still be seen today. The theory behind the Big Bang suggests that intense shortwave radiation was released just a few hundred thousand years after the initial expansion.

This radiation would have been stretched as the universe expanded, meaning that it would exist today in the form of microwave radiation. These microwaves from the Big Bang should still exist in all parts of the universe at all times and are therefore an excellent make-or-break test for whether or not the universe did start 13.7 billion years ago.

Although the Big Bang microwaves were predicted in 1948, they were soon forgotten because astronomers did not have any technology that was sensitive enough to detect microwaves from outer space. However, in 1964 two American radio astronomers discovered them in an episode of pure serendipity. (Serendipity is the art of making fortunate discoveries by accident, or as one anonymous male scientist put it: “Serendipity means looking for a needle in a haystack and finding the farmer’s daughter.”)

Arno Penzias and Robert Wilson were using something called a radio telescope to study galaxies. A radio telescope is a large dish or cone that detects radio waves instead of visible light waves. Annoyingly, the astronomers noticed that they were picking up unexpected radio waves coming all the time from all directions.

Initially, they thought the signal might be an error caused by a component within the telescope, so they began to check every single element of the equipment. They searched for dodgy contacts, sloppy wiring, faulty electronics, misalignments in the cone, and so on.

When they climbed inside the cone they discovered a pair of nesting pigeons that had deposited a “white dielectric material.” Thinking that this pigeon poo was somehow causing the spurious signal, they trapped the birds, placed them in a delivery van, and had them released thirty miles away.

The astronomers then scrubbed and polished the cone, but the pigeons obeyed their homing instinct, flew back to the telescope, and started depositing white dielectric material all over again. When I met Arno Penzias in 2003, he described to me what happened when he recaptured the pigeons: “There was a pigeon fancier who was willing to strangle them for us, but I figured the most humane thing was just to open the cage and shoot them.”

Of course, even without the pigeons and their pigeon poo, the microwaves still kept coming, and after several weeks Penzias and Wilson eventually realized that they had discovered the leftover radiation from the Big Bang. This was one of the most sensationally serendipitous discoveries in the history of science, and a decade later the lucky duo were rewarded with the Nobel Prize for essentially proving that the Big Bang had really happened.

Some people sneer at the accidental nature of this discovery and question whether it deserved the Nobel Prize. Such folk would do well to remember the words of Winston Churchill: “Men occasionally stumble over the truth, but most of them pick themselves up and hurry off as if nothing ever happened.” Indeed, it seems likely that other astronomers probably detected the microwave radiation from the Big Bang before 1964, but it was so faint that they ignored it and carried on regardless.

In fact, you have probably witnessed this Big Bang radiation yourself without realizing it, because most old radios are capable of picking up microwaves. And because a radio can act as a very, very, very primitive radio telescope, I suggest that you use one as the focus for your Christmas celebration of the birth of the universe.

Here’s what you need to do. At some point over the Christmas period switch on an analog radio and retune it so that you are not on any station. Instead of “Jingle Bells” or “Away in a Manger,” all you should be able to hear is white noise. This gentle, calming hiss is the audible output caused by all sorts of random electromagnetic waves being picked up by your radio aerial. You cannot single them out, but rest assured that about one percent or two percent of these waves are due to microwaves from the Big Bang.

In other words, your humble radio is capable of detecting energy waves that were created over 13 billion years ago. While everyone else is pulling crackers or arguing over the last chocolate orange segment, you can simply close your eyes and listen to the sound of the universe. You are experiencing the echo of the Big Bang, a relic of creation, the most ancient fossil in the universe.

Please visit CNN.COM for other space related news – and for the latest on the European Travel Crisis