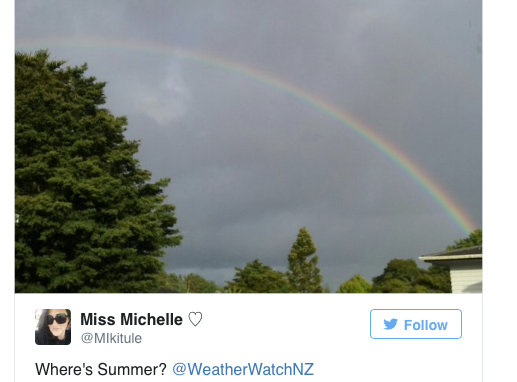 While some western parts of the country – particularly Canterbury and Gisborne – have been sweltering in high temperatures to kick off our warmest season, many others canÂ´t say the same.

For most kiwis, summer signals a return to jandals, BBQs and beach towels – but the start of this summer has seen some cooler than average conditions in most places.

Auckland, Hamilton, New Plymouth, Palmerston North, Wellington, Invercargill and the West Coast – to name a few – have seen much lower December temperatures this year than normal – and, as with most of the wacky weather around the Pacific – itÂ´s all thanks to El NiÃ±o.

Check out some of our readersÂ´responses to the recent cooler weather, below – and keep the submissions coming, on our twitter page, here.

@WeatherWatchNZ @MetService Snow on Richmond ranges. Vines are finding it a bit chilly this morning pic.twitter.com/3uGLtzqE6a

At least someone in Southland is getting some sun…. @WeatherWatchNZ pic.twitter.com/y1d9s60n7W