Where are the rain makers? We track 3 lows coming up (+4 Maps) 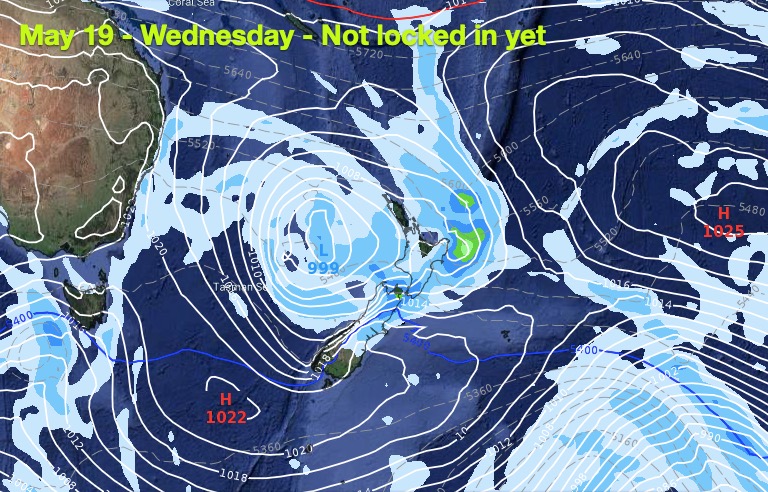 As we reported in our recent May Outlook, we are expecting below normal rainfall in many regions – especially for the first two to three weeks of May.

Despite the continued big uptick in high pressure the Tasman Sea is a bit of a breeding ground for lows and rainmakers this month. The only issue for them reaching NZ is the high pressure smothering our nation.

For the next week ahead, most of the country leans much drier than usual for this time of the year, except for the West Coast.

Rainfall totals in the east are very low, with as little as just 5mm to 30mm forecast for some parts of Hawke’s Bay and Canterbury over the next 15 days ahead.

The 3 possible Rainmakers:
1) This weekend heavy rain returns to the West Coast – but little makes it over to the east.

2) Next week another Tasman Sea low forms and sometime mid to late week the rain portion of this system will likely cross NZ from the west. Again, rainfall chances look fairly low in the east, or maybe even non-existent. Overall it looks weak – but it is slow moving, which can be helpful at lifting totals here and there.

3) Week 3 of May sees the 3rd rainmaker – and this one currently looks most intense, but it’s so far out (15 days away) that the accuracy won’t be as high in the modelling – or put another way, it may not look quite like the modelling says it will look now. Still, it’s one to watch and for those desperately wanting rain it’s positive to have some silver linings to focus on.

To drill down even deeper, please visit www.RuralWeather.co.nz