When exactly do rain & gales return to NZ? 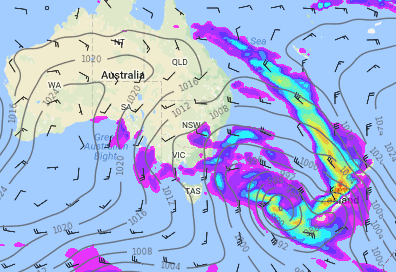 It’s another stunning day across many parts of the country with clear blue skies following frosts and mist/fog patches earlier.

High pressure remains dominant and while the high starts to shift a bit over the next couple of days, allowing in more cloud and fog and even showers this weekend, the general pattern is still mostly dry and calm for the next few days.

Over the next 4 days (until the end of Sunday) we can expect cloudy, foggy and misty areas to increase as the high shifts more eastwards. This shift will also allow showers to move in – like the eastern North Island over the weekend, or the western South Island.

So when does the Rain return?

Proper set in rain arrives to the West Coast on Monday – and that same cold front moves into the North Island overnight Monday and across Tuesday – but it’s much weaker for the North Island with only patchy rain, showers and drizzle.

Next Wednesday another front moves into the West Coast bringing another period of rain, but it looks like it might weaken to showers only as it tries to cross the North Island.

According to the reliable long range modelling the next burst of heavy rain for both islands – along with possible gales – looks over a week away, around next Friday.  That’s when a low in the south Tasman Sea deepens and heavy rain from Australia comes our way with gale nor’westers.

In a nut shell – high pressure dominates until the weekend, with the next low with rain and gales possibly not until next Friday, the last Friday of winter 2016.