Home > News > What is going on with our Thursdays? Cha...

What is going on with our Thursdays? Chance of low next week too 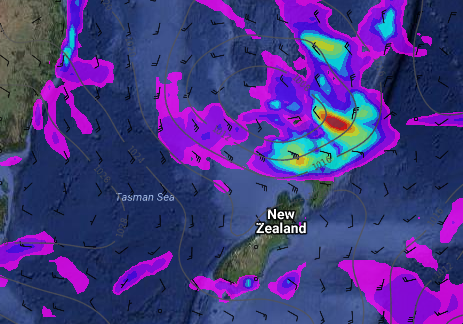 This Thursday will be the third consecutive one with rough weather – now the outlook for next Thursday, well, your guess is no doubt as good as mine if you’re thinking “more rain?”.

This coming Thursday we’re dealing with a burst of heavy in both islands and along both western and eastern coastlines, including Otago and Canterbury. The good news is that at this stage the chance for rain warning amounts in areas that were just flooded doesn’t look highly likely, but rain could set in and on top of the saturated ground we can’t rule out further issues. It’s one to definitely watch.

WeatherWatch.co.nz says current rainfall estimates in coastal Otago and Canterbury this Thursday look to be around generally 15 to 40mm.

However next Thursday it may be the North Island’s turn to, once again, to face sub-tropical downpours. It’s still a long way out and so this cannot be locked in yet – but it’s worth highlighting with so many people asking two questions lately. 1) When will these weekly rain events stop? 2) How will August’s begin weatherwise?

For now the chaotic, neutral, weather pattern New Zealand has been in since Autumn looks set to continue into August too. (ie, no driving force like El Nino or La Nina, so chaos means a big variety of weather conditions in NZ).

Keep up to date with Government Agency MetService and the fully tax funded warnings and watches they provide to the public around potential severe weather this Thursday and Friday,

WeatherWatch.co.nz will have more details on this Thursday’s weather in our weather video out this morning…and more details about next week’s potential rainmaker once we get through this coming Thursday and Friday. What’s that saying?… ah yes – when it rains, it pours.