What is an anticyclone? 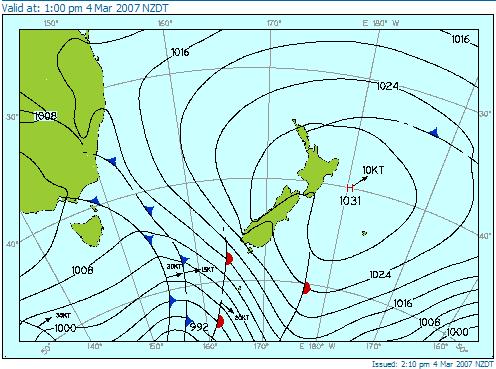 Anticyclones form when air currents in the high and middle atmosphere converge, piling up air in one area. The air inside these areas sinks from high levels towards the earth’s surface. The sinking air is warmed by compression, and this evaporates any cloud. This is why high pressure is generally – but not always – associated with good weather.

A spectacular frost occurred in Otago in early July 1991 when overnight air temperatures dropped below -15°C – for days in some places. The effect was chaos. Beer froze in pubs, water pipes burst, diesel turned to sludge, and rabbits with frostbitten ears were accused of cannibalism on national television. Exposed metal (such as gates) became so cold that skin froze to it on contact.

However, a layer of colder air is sometimes trapped below the sinking air, typically as cloud, and in winter this frequently produces drizzle. In summer, although the cloud usually evaporates before midday, its moisture often feeds the showers or thunderstorms that develop over certain locations – such as the Canterbury Plains.

Fine weather generally occurs in areas sheltered by a mountain range. The cloudiest areas are those where the wind blows from the sea onto the land, for instance Christchurch in a north-east wind.