Home > News > Wet to start this week then becoming mor...

Wet to start this week then becoming more settled 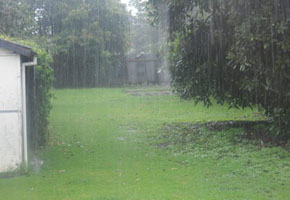 A large depression brings unsettled weather to the country today, most places are looking wet or will become wet. The east coast of the North Island looks to be the driest place after early rain clears this morning, afternoon temperatures should be reasonable too. For todayâ€™s weather check out this morningâ€™s forecast here.

Tomorrow conditions will ease across the country as Mondayâ€™s depression slowly passes out to the east. Morning rain or showers mostly clear across the North Island although the odd one may continue through the day south of Wanganui in the west, about Wellington and the Wairarapa.

Sunny for the West Coast of the South Island with southeasterly winds, morning cloud about Southland and
Central Otago breaks to afternoon sunny spells. Coastal Otago sees mostly cloudy
skies during the day after morning showers clear. Canterbury sees rain, possibly
heavy in the morning then easing to showers by midday, out on Banks Peninsula
rain persists for much of the day finally easing overnight and clearing.
Marlborough and Nelson are mostly sunny with southwesterly winds.

On Wednesday the South Island is looking dry and mainly sunny, morning cloud in the
east breaks to afternoon sunny spells and easterly winds. For the North Island
conditions are settled and mostly sunny with light winds, an upper level pool of
cold air destabilises the air in the afternoon bringing the chance of isolated
showers to many inland areas Auckland southwards then clearing in the
evening.

Thursday sees a ridge cover much of the country extending out from an anticyclone to the north of New Zealand. Conditions looks mostly sunny and settled with light winds for the whole country, a northerly airflow builds
about the South Island from afternoon as a low pressure system and front lines
up in the Tasman Sea. Cloud increases along the West Coast from evening then
showers move in overnight.

East is best on Friday as a northwesterly airflow covers New Zealand,
no strong winds look likely. Western regions of both islands see cloudy areas
and patchy showers, out east conditions are dry and warmer with some high cloud
likely.