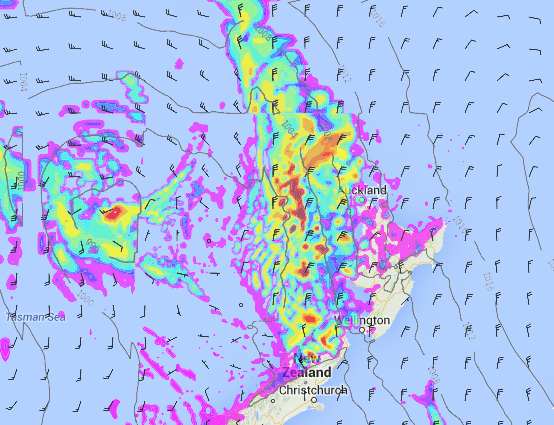 Well it’s certainly getting interesting for weather watchers around the country, as pretty much the whole North Island sits under a huge rain system, bringing heavy showers and steady rain for most.
The top of the North Island is also feeling soggy, as Nelson, Marlborough and Tasman, along with much of Canterbury, has seen shower and rain activity this morning too.

Head Weather Analyst Philip Duncan says the system is moving quickly, with the main set of bad weather crossing now with the low.
“Heavy rain and winds are flying through Auckland, and we’re getting reports of high winds through the central city in particular.”

There’s been at least one report of a blow-out window caused by the winds, but Duncan says the worst of the weather will be gone by tomorrow.
“This rain is welcome news for many dry parts of the North Island, though the wind probably takes the shine off of things a bit – but after tomorrow, the winds will turn more westerly and ease – while we are also looking at a southerly change later in the week.”

Visitors to our Facebook page have been giving us details – telling a story of a fairly national deluge – with Nicola Geenty telling us it’s “wet and windy in Tauranga”, while Margrietji Joubert told us about the drive between Ohakune and Auckland:
“Left ohakune at 5am this morning,driving back to auckland. Been wet and very windy the whole way so far. Not expecting it to get any better either.”

This photo came through from Debbie Reief in Coatesville – where she says it’s “wet and windy”, while Jayne Quaife said she’s “glad there’s no large trees about” her place in Auckland, while Sharon Weber told us of “torrential rain in Albany”.

Hi WW, The rain and wind died away just after lunchtime up here in Whangarei and since we have enjoyed blue sky and sunshine and very warm temps. Wind is somewhat moderate now with occasional gust but all quite beautiful. Rain was most welcome this morning and everything looks nice and green again.